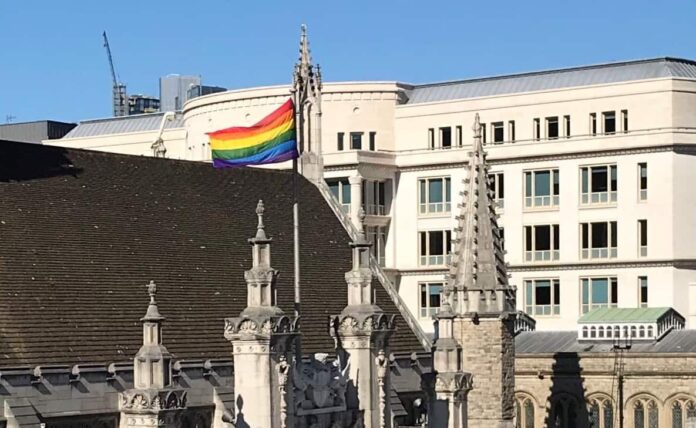 THE Pride flag has been hoisted into place above iconic landmarks as the Corporation shows solidarity with the LGBT+ community.

As the rainbow standard was raised at Guildhall, Mansion House and the Old Bailey, Edward Lord, chairman of the establishment committee, which leads on the Corporation’s workforce and inclusion policies, said: “Pride matters.”

He added: “We are raising the flag to show our commitment to fairness and diversity and our support for the City Corporation’s LGBT+ employees and elected members, as well as LGBT+ communities in London and the UK.”

We have just raised the #Pride Rainbow Flag over Mansion House to celebrate @PrideInLondon and @cityoflondon’s support for the #LGBT+ community #PrideMatters pic.twitter.com/LUQjh5smHo

On 7 July, the local authority will join the Pride in London Parade for the first time.

Policy chairman Catherine McGuinness said that flying the rainbow flag reminds everyone of the importance of inclusivity, diversity, and acceptance in our society.

She added: “We are celebrating the growing diversity in the Square Mile, while also standing shoulder-to-shoulder with those working in our communities to tackle prejudice.”

Alderman Tim Hailes, the first openly gay Sheriff of London, said it was paramount for the City to have a “visible message” for diversity.

“It is, undoubtedly, with a sense of pride that we are flying the rainbow flag over four historic City buildings during the Pride in London celebrations.

“By raising the flags and taking part in the parade on 7 July, the City of London Corporation is sending a clear and very visible message of support for London and the UK’s LGBT+ communities.”