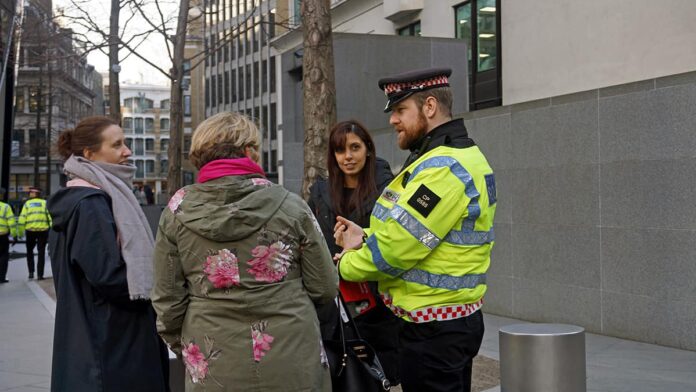 City of London Police is hoping a hot beverage in a new community hub will make officers more “accessible” to the locals they serve on a daily basis.

‘Coffee with Cops’ is a new monthly initiative from the City of London Police where officers from the responsive police team will park up at Kahaila cafe in the recently redeveloped Aldgate Square for an hour of face time with the community.

Sergeant Joe Stevens and Inspector Gareth Santi are two officers spearheading the programme, and say they hope the informal setting will be more appealing to those daunted by the police station and avoid asking questions or reporting information.

“Sometimes people will have an issue they think isn’t important enough to warrant a call to 101 or 999, or maybe they live outside the City but need some advice and don’t have time to visit their local police,” Sergeant Stevens said. “It’s really just another opportunity for people to come and talk to us.”

Any member of the public can drop in and all non-emergency concerns are up for discussion, ranging from minor parking issues right through to drug dealing and other criminal activity on the housing estates. Inspector Santi said the sessions were designed to support the work of the community policing team, which is on duty during weekdays.

“We’re the ones that are here 24/7, every week, we’re dealing with issues in the middle of the night, so for us it’s important that we are as accessible as possible,” he said.

“We do have reporting online, of course, and people can engage via social media, but sometimes you just need to sit down and have a chat with an officer face-to-face to get the answer you’re looking for.”

Find out details of the next Coffee With Cops session via the City of London Police’s Facebook page.