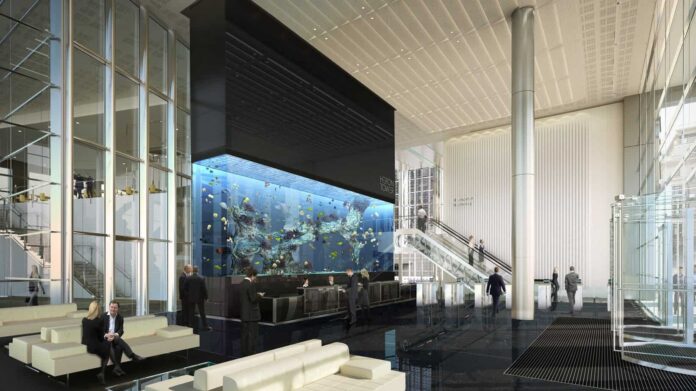 From private art galleries and winter gardens to the largest commercially-owned fish tank in Europe, London is home to some of the world’s most luxurious workplaces.

And as the heart of the UK’s financial and professional services sector, it stands to reason that the Square Mile has some of the priciest desks in town.

The Salesforce Tower at 110 Bishopsgate was ranked number eight on the list, with tenants paying up to £1,200 per workstation per month, according to the report.

Current tenants include software company Salesforce (which also purchased naming rights to the tower in 2014 as part of its 15-year lease), recruitment firm Harvey Nash, and fund manager Securis Investments. Employees enjoy sweeping views of the City and triple height ceilings in reception, which is also home to Europe’s largest commercially-owned fish tank.

Just over the river, The Shard came in at number nine on the list with firms reportedly forking over between £1,000 and £1,200 per desk each month for floor-to-ceiling glazing and three winter gardens on each floor designed to give employees contact with the outside world.

A spokesperson for The Shard would not reveal exact figures, but said “office space is rented at a competitive rate for the market”. Current occupiers range from software firm Sage, media network Al Jazeera, gambling company Tabcorp and luxury jewellery retailer Tiffany & Co.

Scraping into the top 10 is St Dunstan’s Hill, a seven-storey development of nautical-themed offices inspired by views of the HMS Belfast. Firms pay around £1,000 per month for a workstation at the recently refurbished building near Monument, which has a rooftop terrace tailormade for afterwork drinks, and even serviced bedrooms for those who miss the last train.

A few blocks west, the recently refurbished One King William Street is also upwards of £1,000 per workstation, a small price to pay for five-star serviced offices and 4,300 sq ft of private roof terrace with spectacular views over the Bank of England.

But even City rents seem cheap compared with what some firms are paying for a prime spot in Mayfair or Kensington.

Serviced offices at 32 Curzon Street in Mayfair reportedly set businesses back an eye-watering £1,500 per workstation per month, with the Grade-II listed townhouse claiming top spot on the list for its position between Park Lane and Berkeley Square. Around the corner and coming in at number three, 43 Brook Street commands about £1,200 per desk for “hotel-style concierge” (they boast of “close ties” with Claridges) and an art gallery for some culture during your lunch hour.

Commenting on the report, LondonOffices CEO Chris Meredith said that while businesses are still placing location at the top of their list of priorities when looking for office space, West London postcodes carry hefty premiums that can outweigh their benefits.

“As a business owner, you might think that certain areas of West London will land you in better stead to be taken seriously and succeed, but this isn’t necessarily the case,” he says.

“Whilst of course being able to boast one of the most enviable business addresses in the country would be great for your business’ image and perception, there are other areas of the city that offer far better value for money.

“London Fields and Hackney is proving to be exceptional value lately – we’re helping clients achieve rates around £300 per workstation, which is a quarter the cost of the likes of Mayfair.

“My best advice would be not to be blinded by these luxurious postcodes. Instead, take into account what your business really needs opposed to falling victim to your ego, and visit as many buildings and areas as you can before making a decision.”

Knight Frank’s 2018 Global Cities report recently named Shoreditch as the world’s most expensive tech district, with rents reaching $91 (£64) per sq ft, well ahead of Mid Market in San Francisco where rents are $77 (£54) per sq ft, and Silicon Docks in Dublin at $76 (£53) per sq ft.