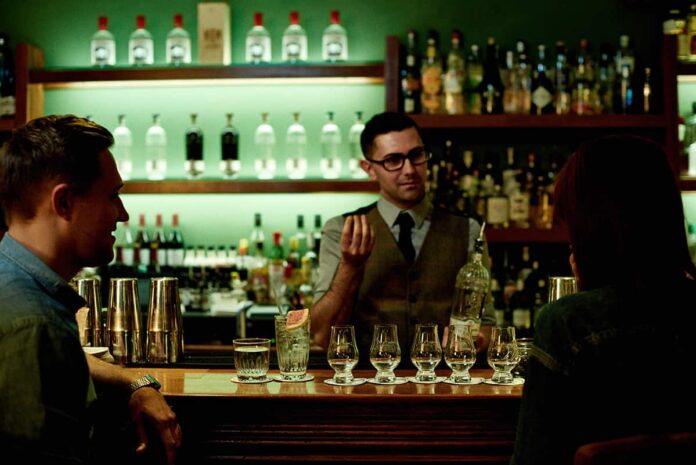 THE year 2016 yielded very few winners, all political events considered, but one man with several reasons to smile was Jonathan Clarke.

On top of that was the news that Britain is officially under the gin-fluence, knocking back more than one billion G&Ts in the last 12 months, driving record sales and prompting the drinks industry to declare 2016 ‘The Year of Gin’.

But despite what all those barflies holding juniper-flavoured fishbowls would have you believe, this isn’t our first ‘gin craze’.

That honour goes to the good-time girls and boys of early 18th-century London, who consumed so much of the stuff that the city was crippled by a virtual epidemic of extreme drunkenness, prompting public outrage and a combination of taxes and licensing fees to try and stem the flow of Mother’s Ruin.

Back then, there was a gin distillery on every street in the Square Mile. Today, there’s just one, squirrelled away in a subterranean cocktail bar below Bride Lane.

When Jonathan opened a micro-distillery in his bar in 2012, he ended a 200-year dry spell for the Square Mile. It all happened quite by accident when he was forced to find a use for the space after having to evict his tenant for running a lap dancing club on the sly.

A big gin drinker, though with little knowledge of how to make it, he bought two colossal copper stills from the US (affectionately named for Two Fat Ladies’ Clarissa and Jennifer), installed them behind bomb-proof glass, and set about teaching himself the art of distilling gin.

There were some bumps along the way; namely a tussle over the City of London Corporation’s logo, which is affixed to every glass, bottle and coaster in the joint despite not actually having anything to do with the local authority.

The rights to the logo were obtained via a loophole – now closed, in case anybody was getting any ideas – and some serious smooth talking on Jonathan’s part, who managed to get the Lord Mayor at the time to permit use of the logo so long as he treated it right.

A process of trial and error had the distillery producing, by Jonathan’s own admission, “some absolute rubbish” to start off with, but five years later, it’s safe to say that if the City of London’s ancient crest falls into disrepute, it won’t be by this bottle. Adding to the success of their Sir Christopher Wren gin in 2016, City of London Dry, Old Tom, and Square Mile London Dry all won Double Gold Awards at the 2017 World Championships in April.

“There are only 30 Double Golds handed out each year,” Jonathan explains. “So I’m pretty proud of the fact that we currently hold 10% of them.”

So how does this crack team of distillers make so much magic happen in what is essentially a 2x3metre bomb-proof dungeon with a couple of fancy cauldrons?

The best way to find out is by booking yourself on a tasting and making tour with COLD brand manager and gin know-it-all Alfie Amayo.

The Gin Lab Experience runs through the process of designing and distilling your very own gin, from flavour combinations through to wax-sealing the bottle.

On the table in front of us there are scales, a beaker and around 25 different ‘botanicals’ (a fancy word for herbs and spices, according to Alfie) that we will mix and match to create a unique gin that is exactly to my taste.

To a base of juniper berries, coriander seeds and angelica root we need to add upt to 10 ingredients from the pungent, citrus, earthy, mellow and floral categories, though Alfie advises “less is more”.

It’s half chemistry lesson, half home tech, with a bit of history thrown in, though the amount of information one retains is directly proportionate to how many of Alfie’s excellent G&Ts one consumes.

What you do take home from the Gin Lab Experience, however, is a 70cl bottle of gin, fully customised, a recipe sheet for when you invariably need another few bottles, a plan to return to the bar for a few more drinks, and a smile about as wide as Jonathan Clarke’s.