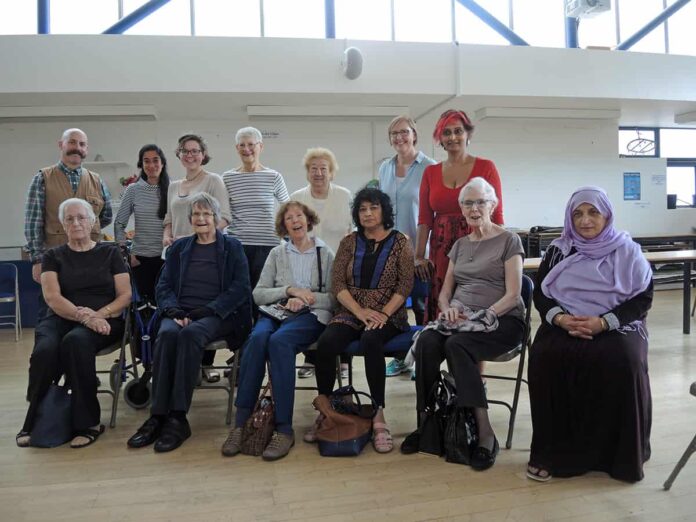 A group of City residents in their 70s and 80s are gathered in the Golden Lane Community Education Centre listening to a grainy recording of schoolchildren in Millwall singing the iconic nursery rhyme from 1938.

Most smile in recognition. Mary, 80, joins in for the second part of the chorus: “Do you know the muffin man who lives on Drury Lane?”

It might seem like a fairly innocuous moment of nostalgia, but these trips down memory lane are important for members of the City Memory Group, a weekly get-together for people who are experiencing memory issues, or have a diagnosis of dementia.

The song finishes and sound archivist Ian Rawes cues up the next; a 1937 recording of the self-styled Mayor of Petticoat Lane, Mike Stern, who rattles off a cheery sales pitch for ladies’ bloomers.

Mike’s cockney twang is familiar to members of the group who grew up in the East End, but not to Mary, a Scot who spent two decades as a missionary in Africa before moving to the Middlesex Street area several years ago. She enjoys it all the same.

“I think we all like sharing our stories, and they’re all so different,” she says. “It’s lovely just to chat to everybody here each week.”

Group manager Madhumita Bose says you should never underestimate the value of a good old chat.

“We don’t always do things that are strictly related to memory,” she explains. “My main
focus is to create a good social atmosphere for the group to come together and feel as though they are free to talk and share ideas.”

Madhumita runs the group on behalf of the Forget Me Not project, which took over
facilitating the group from Camden Aged Care midway through last year.

Over the last 12 months the group has done painting, flower arranging, fitness classes, cooking, and visited the Olympic Park.

“We try to take a holistic approach, and every week is different,” Madhumita says. “We’ve done dancing to music from the 1950s, talks about nutrition for the brain, art – anything that might connect with their past and help maintain that connection.”

Ian has been invited to host this particular session as the founder of London Sound Survey, an online archive of sounds documenting everyday life in London throughout its long history.

He is keen to interview members of the group about the sounds and what they remember of the decades they were recorded.

Madhumita says sound is a particularly effective form of therapy for people with memory problems as it fires sensory function that stimulates the brain.

“It’s about tapping into those senses that are still working – taste, smell, sound, touch and sight – and connecting them back to communication.”

There doesn’t seem to be any issue with that, as the group talks animatedly about their plans for the summer break, before meetings begin again in September.

Cries of ‘see you in a few weeks’ ring out as some begin to wander off in twos and threes.

Madhumita is pleased with the response: “I think the most important message we have tried to get across is not to be scared of the condition,” she says.

“We often see people in denial, which I can totally understand, but suffering by yourself is very lonely.

“We’re not making light of it, but memory problems are something we have to live with, and there is a life, there are friends.”