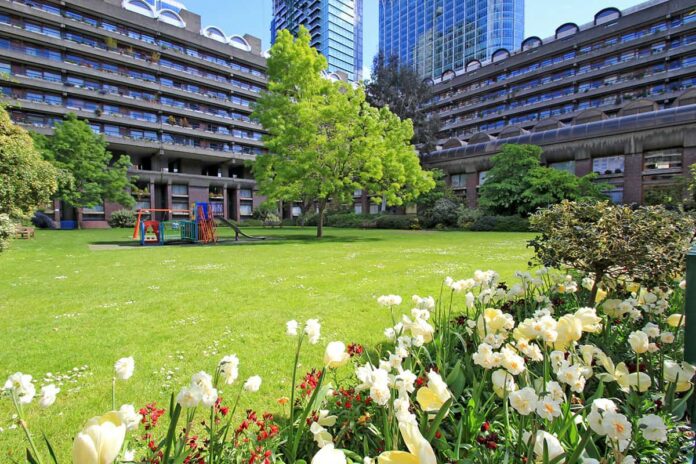 ASK any outsider about living in the City of London and watch as their minds sift through a long list of architectural landmarks before arriving at one of two; the Golden Lane or Barbican estates.

The first is a modernist marvel, commissioned by way of a City of London design contest staged in 1951 to kick-start postwar regeneration and provide much-needed council housing for those who worked in and serviced the City.

A young architect by the name of Geoffrey Powell beat out 178 entries to claim victory and, teaming up with his Kingston Polytechnic colleagues Peter ‘Joe’ Chamberlin and Christoph Bon, delivered an urban village so successful it earned them a second commission next door; a Brutalist icon known as Barbican.

The far bigger and better known of the two estates, the Barbican complex offered a utopian ideal of inner-city living for the era, demonstrating how high-density residential neighbourhoods could be integrated with schools, shops, restaurants and cultural institutions.

It was built during the 1960s and ’70s and opened by the Queen in 1982, who declared the Barbican “one of the modern wonders of the world”.

More recent additions to the Barbican have been Frobisher Crescent and the conversion of the former YMCA building on Fann Street into Blake Tower has brought this number closer to 2,200.

There are over one hundred different flat ‘types’ or internal designs according to estate website Barbican Living, but overall most have simple layouts designed to maximise light in living rooms and bedrooms with compact bathrooms and galley-style kitchens in the centre.

Tina Evans, group director at estate agent Frank Harris & Company, says there is usually a good mix of studios right through to four-bedroom flats across the estate on the market at any one time.

Some are renovated, others still have their original kitchens, which have proudly stood the test of time. She says a one-bedroom flat in the Barbican will set you back from £700,000, two-bedroom flats are between £850,000 and £950,000, and expect to pay between £1.4million and £2m for a three-bed.

“Each of the blocks has different advantages – Defoe House is popular because they have a beautiful outlook over the lake and the gardens and a position away from the road so the flats are really quiet,” Tina says.

“The Postern has some of the larger houses – we’ve got a four-bedroom on the market at the moment with a great view of the Roman Wall remains – and certain blocks are better suited to smaller households with clever studios and one-bedrooms.”

The Golden Lane Estate is made up of about 550 properties across nine blocks, ranging from the iconic Crescent House to the bright yellow 17-storey beacon Great Arthur House, which was, for a brief period, the tallest residential building in Britain.

The estate’s design was geared towards young professionals rather than families so the majority of homes are studio or one-bedroom, although there are some two and three-bedroom flats and maisonettes available.

Unlike the Barbican, where most, if not all flats, are now privately owned, about half the Golden Lane Estate remains public housing, which means properties on the open market are harder to come by.

A real mix of professional couples looking for proximity to the office as well as a strong night time economy, families seeking access to large swathes of parks and gardens in the centre of town and, of course, creative types who want to call an architectural icon home.

Tina says that while there is some interest from investors and buyers hunting for a weekday pied-à-terre, the vast majority are looking to live there full-time, which fosters a strong sense of community on both estates.

“Particularly in the Barbican, a young couple might start out with a studio and then need more space, but they tend to fall in love with it so we get a lot of people moving around within the estate – upsizing and downsizing,” she says.

Barbican Station on Goswell Road is serviced by the Circle, Metropolitan and Hammersmith & City lines. Residents can pick up most other Tube lines from City stations, which are all within walking distance.

West of the estates, Farringdon station is set to become one of the best-connected in the Capital when Crossrail provides direct links to Canary Wharf, Paddington, Heathrow and outer London from December. Buses service Clerkenwell Road and Rosebery Avenue.

When it comes to dining out, locals have their pick of foodie hotspots like Shoreditch, Exmouth Market and Bloomberg Arcade within walking distance, but there are plenty of options even closer to home. 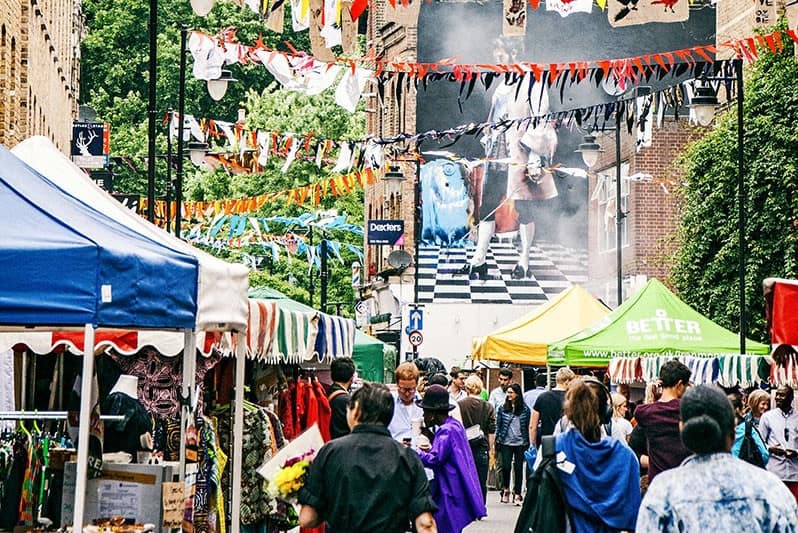 Whitecross Street is a street food fan’s mecca. Photo by Nika Misarina.The Jugged Hare and Chiswell Street Dining Rooms do variations on modern British cuisine in an upmarket, gastropub setting, while Osteria in the Barbican Centre has polished Italian fine dining and prices to match.

Wander down Whitecross Street on weekdays for some of London’s most popular street food traders, but be prepared to fight local workers for the last Buddha Bowl.

It goes without saying that living in the same complex as one of the world’s leading arts centres carries some serious cultural capital.

On the other side of Silk Street, Milton Court Concert Hall plays host to a diverse programme of performances from the Guildhall School of Music & Drama, and plans are firming up for the Capital’s new state-of-the-art concert hall on the current Museum of London site at London Wall.

The Golden Lane Estate has its own leisure centre, pool and tennis courts with discounted rates for residents, and there is a Virgin Active gym opposite Barbican station.

The Barbican Estate is also home to several gardens managed by the City of London Corporation, including three that are reserved for residents and their guests.