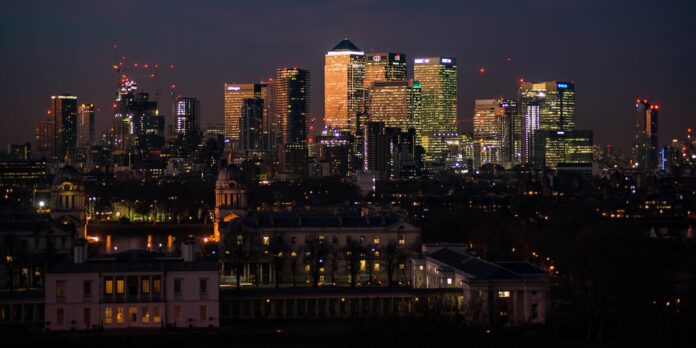 Canary Wharf, like the City of London, has traditionally been seen as a place where people go to work – not where they live. They commute in, work crazy hours in the office towers, and then shoot off back home.

But this has changed over the past few years, as more and more residential developments pop up in the area. This comes as a response to Canary Wharf becoming more lifestyle friendly. New shops and restaurants are flocking to the area while cultural events are becoming far more common.

It still lacks the historical character and edginess of many other London boroughs, but the waterside views more than make up for it. So many of the new developments take advantage of the winding Thames river and distant city skyline. It’s pretty picturesque.

Much of the development in Canary Wharf started in the late 1980s once the busy port closed. This means few old builds exist; this is a modern hub of London after all.

Property consists mainly of apartments, with some penthouses and riverside developments boasting views across the Capital. A mix of modern townhouses, a few surviving Victorian terraced houses, Edwardian cottage estate type houses, and former council flats provide a range of alternative choices, too.

The new cutting-edge architectural residential developments are nestled between the area’s commercial buildings. The top spots to look out for include South Quay Plaza (with new cafes and restaurants going in on the ground floors), Spire London, Landmark Pinnacle, Wardian and The Madison.

Who’s buying into the area?

Tom Holmes, Foxtons’ Canary Wharf sales manager, notes:  “Over the last 30 years, the population of Canary Wharf has more than doubled and transport links have significantly improved within the area, making it both a booming financial district and an increasingly popular area to live.”

Foxtons has noticed how the Canary Wharf area attracts a wide demographic of young professionals aged between 25 and 40.

The Winter Lights Festival is the main annual event which draws people into Canary Wharf from all over London. The entire concrete jungle comes alive with light installations taking over public spaces. It’s exactly what the city needs when winter is so dark and cold.

But there is plenty more going on here, too. The Museum of London Docklands branch offers up some state-of-the-art exhibitions and performances for kids and adults alike. They also run some great historical walks and talks.

Summer also sees the Canary Wharf Outdoor Stage bring live music, dance, and theatre to the area. The Family Festival running in August is also a sign to show that this is a residential space  and destination in its own right.

Hopefully, it won’t be too long until the Elizabeth line will stop at the recently developed Crossrail Place – a massive floating train station that looks like it was plucked right out of a sci-fi film.

But it’s more than just a station. You’ll find the perfect escape at the Crossrail Place Gardens, designed by the famous British architects Foster + Partners. This four-floored development is also home to Giant Robot, a seven-days-a-week rooftop food arcade from the team that brought Dinerama to Shoreditch.

Here, you’ll find countless street food stalls, bars and a long terrace overlooking the water and surrounding cityscape. But that’s not where the foodie options begin and end. Canary Wharf has built up quite the collection of casual and fine dining spots, and there are plenty of bars and pubs around for after work and weekend drinking.

Although, it is unfortunate to note that most of these dining destinations only come in the form of established businesses setting up Canary Wharf locations – Canary Wharf developers don’t quite like small businesses which have their own special charm and unique character. For the area to become a proper residential hub, more small businesses will need to get access.

Canary Wharf is serviced by a whole host of transport links. The DLR and Jubilee line get most of the workers in and out of the area each day, but the arrival of the Elizabeth line will see even more people flocking in.

You can also get a few buses (even a water bus) here, while the modern metropolis also offers up several new cycling paths in and out. City Airport is also right nearby, making business trips and holidays to Europe and the USA so much easier.