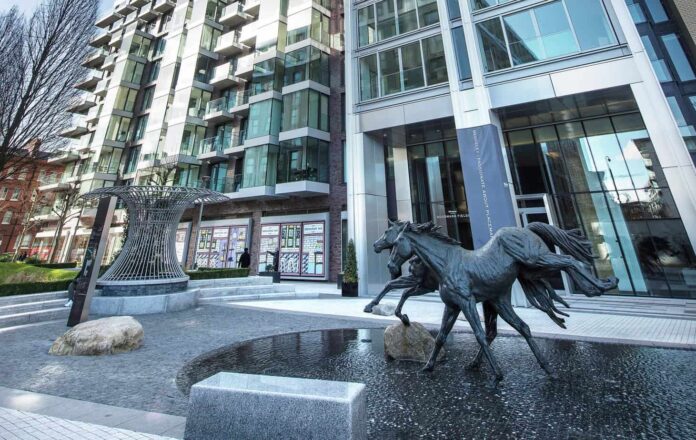 You see them often amongst the commuters clogging Aldgate High Street. Those former locals who have returned to this pocket on the eastern tip of the City after a few years to find it so completely transformed they have to double back and check they got off at the right Tube.

Hoggish office blocks have made way for shining skyscrapers, crumbling warehouses converted into character-filled lofts or slick mixed-use developments, and dark corners replaced by manicured public spaces. It is a transition befitting Aldgate’s position as the meat in the sandwich between London’s two financial powerhouses, the City and Canary Wharf. But while neighbouring Spitalfields and Shoreditch have retained enough artfully distressed brick walls to keep the hipsters happy, Aldgate’s gentrification has a different look and feel.

Its history, first as a medieval gate into the Square Mile then a prime settlement for waves of immigrants in the 18th and 19th centuries has established a permanent mark, but the more recent mid-rise office blocks are slowly being erased, leaving a blank canvas for developers to get creative.

The result? Innovative architecture, clever planning and top amenities tailor-made for the working professional. Today, much of Aldgate is a shiny new penny – so it’s unsurprising you will need a fair few of those to secure your slice.

Aldgate retains a smattering of Victorian and even Georgian housing south of Royal London Hospital in the tightly-held pockets of Turner and Newark streets, and some council estates, but the bulk of its current housing stock has been built in the last five years.

Ben Ainsworth, sales manager at Knight Frank Aldgate, says the wave of development was lead by Goodman’s Fields, Berkeley Homes’ mixed-use scheme of 920 apartments, student accommodation, a hotel and restaurants currently in the final stages of construction on Leman Street. More followed, including Telford Homes’ Cityscape, Redrow’s 21-storey One Commercial Street, and now Barratt Homes are getting in on the act with Landmark Place, a riverfront development of 165 flats by Tower Bridge.

“The council and the Mayor have done a good job to make sure developers aren’t just building towers and selling them off, these schemes are improving the public spaces and making a real contribution to the community,” Ben says.

“I can see it continuing to improve with more retailers and restaurants, and eventually Aldgate is going to become an iconic location that people seek out for its vibe – like Shoreditch is now, but about 20% cheaper.”

Unsurprisingly, professional couples make up the bulk of buyers in the area.

“These are people who would have typically bought in the south west of London, but are jumping at the chance to live in an area where they can walk to work,” Ben says.

“Developers are definitely catering to this market of cash-rich and time-poor buyers with amenities like gyms, business lounges, and concierge service, which is proving popular.”

There are also plenty of enquiries from wealthy overseas students looking for proximity to campuses for London Metropolitan University, Queen Mary University, Goldsmiths University and the London School of Medicine.

Let’s get the game changer out of the way first – Crossrail. Come December, Aldgate will become of the best connected districts in the Capital thanks to its prime position next to Whitechapel, with journey times of 10 minutes to Bond Street, three minutes to Canary Wharf and just under 40 minutes to Heathrow on the Elizabeth line.

But locals haven’t exactly been slumming it so far; Aldgate East is on the District and Hammersmith & City lines, Aldgate picks up the Circle line and a short walk west will connect you up to major City Underground junctions Liverpool Street and Bank. Buses service east and south London and across town to Angel and Kings Cross.

Proximity to Shoreditch and Spitalfields means Aldgate residents have two of London’s top dining destinations on their doorstep, but there are a growing number of options even closer to home.

Gunpowder, Madame D’s and Gul & Sepoy are a trio restaurants around Commercial Street serving up some of the best Indian and Himalayan cuisine in the Capital, or for cheap and cheerful, head east to Whitechapel institution Tayyabs and order the lamb chops.

The Dispensary deals in modern British cuisine and cask ales from a restored Victorian building on Leman Street, while Satyrio on Aldgate High Street is the go-to for authentic Italian in a setting straight out of the Tuscan countryside.

When it comes to drinking spots, Leman Street Tavern is a trendy newcomer popular with the after work crowd, while those that prefer poshed up pub vibes will find craft beers flowing at The Culpeper and a rooftop garden from which to sample them all.

Edgy Whitechapel Gallery is renowned for its groundbreaking exhibitions of contemporary art, Wilton’s Music Hall is an excellent alternative to the West End, and the Curzon cinema in Goodman’s Fields screens new releases as well as arthouse and independents.

As for public spaces, the City of London’s new Aldgate Square development between St Botolph-Without-Aldgate Church and Sir John Cass Primary School will play host to a strong programme of community festivals and events when it opens this summer.