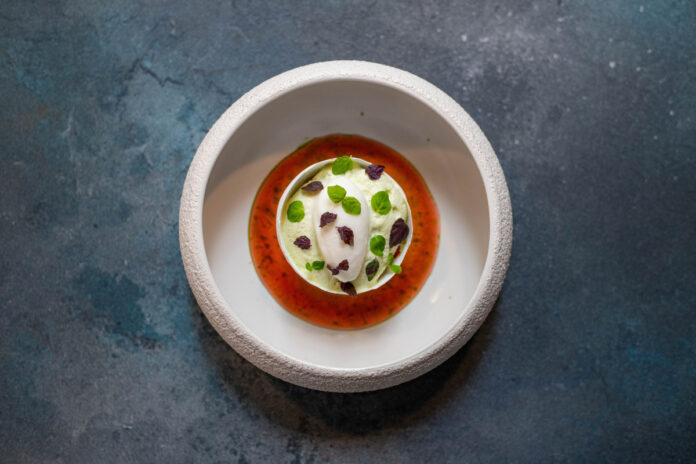 If you’ve not heard of Le Cordon Blue, where have you been hiding? The world-leading culinary school is steeped in history and has a rich heritage spanning 120 years.

Their story began in January 1895 when French journalist Marthe Distel launched a weekly publication called La Cuisiniere Cordon Blue, the first-ever culinary magazine in France, which educated its readers with the most unique recipes for its time.

The publication grew from strength to strength, resulting in the opening of a small Parisian cookery school in October that same year, welcoming a select number of students from around the world. 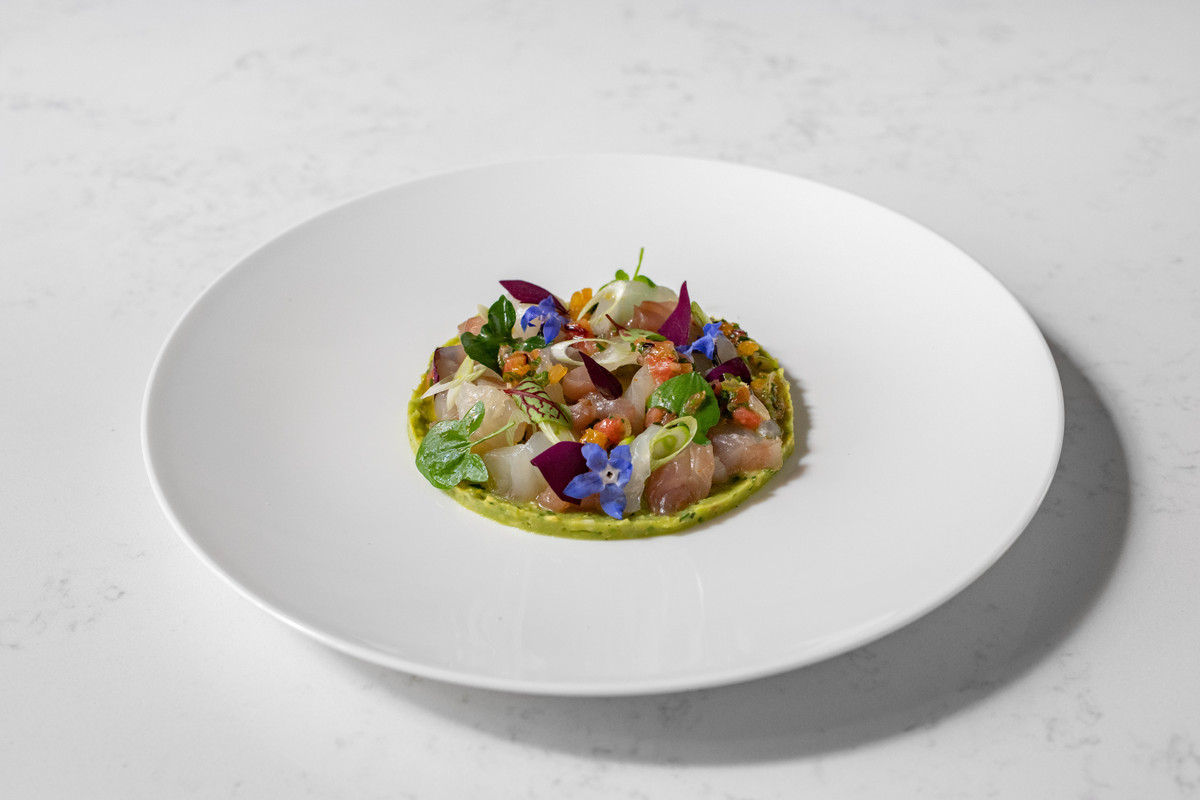 In 1931, two former Paris students took Le Cordon Bleu to London, where they founded L’Ecole du Petit Cordon Bleu. Over the years, the school gained international recognition and expanded massively, moving home multiple times to fit the growing business and becoming the refined establishment that it is today – Le Cordon Bleu London, based in Bloomsbury Square.

The Le Cordon Bleu collection of schools have become the most foremost training institutions in the world, maintaining a presence of over 25 schools in more than 18 countries.

Fast forward to 2022, and Le Cordon Bleu has opened brand-new establishment CORD, based in our very own City of London. CORD by Le Cordon Bleu is the first fine dining restaurant in London by the famed culinary arts institute. But it is much more than that – CORD is an all-in-one concept that also incorporates a café, cooking school and a culinary event space. It is a true celebration of gastronomy.

Quite rightly, we were ecstatic when we were invited to dine in the new venue. When we arrived at the grade II listed Lutyens designed building, our coats and bags were kindly taken to the coatroom, and we were guided to our table by very welcoming staff.

Walking through the room, we were struck by how light and airy the space is, with large windows to let in sunlight and bright white walls to reflect it. In keeping with tradition, the classic Le Cordon Bleu colours of blue and gold were in abundance, with gorgeous blue chairs and gold embellishments throughout the room.

Sitting in our extremely comfortable teal chairs, we were introduced to our waiter for the evening, Ayumu, and our sommelier, Sho. CORD being a new concept, we were merrily informed about the way the restaurant worked and introduced to the A La Carte menu.

Sipping on sparkling water, we mulled over the expansive range of dishes and tried to decide on our drinks. Sho recommended that we opt for wine pairings with our courses to bring out and complement the flavour profiles of each dish – we happily acquiesced!

Once we had decided on our starters and mains (no mean feat), bread was brought out to the table for the wait – it was deliciously warm to the touch, soft on the inside and crispy on the outside, and served alongside olive oil and butter.

When our starters arrived – heirloom tomatoes and gratinated razor clams – the CORD experience properly kicked off. Ayumu explained our dishes with such a passion that it was difficult not to inhale them immediately.

NOW READ: Alternative eating experiences in the City of London

Heirloom tomatoes might not sound like the most exciting of starters, but CORD executive chef Christophe Marlex has created a true marvel, here – the dish contained a super fresh mix of red, orange and green tomatoes, bursting with richness and colour on the plate.

Alongside the tomatoes, chickpea panisses, crisps, nasturtium and basil leaves, tomato syrup and basil oil offered an explosion of flavour, quite unlike anything we had tasted before.

Likewise, the gratinated razor clams did not disappoint. Served with button mushrooms, almonds and mustard, they possessed a unique and fragrant flavour profile and were so beautifully presented, that we were quite sad when we had finished eating them. 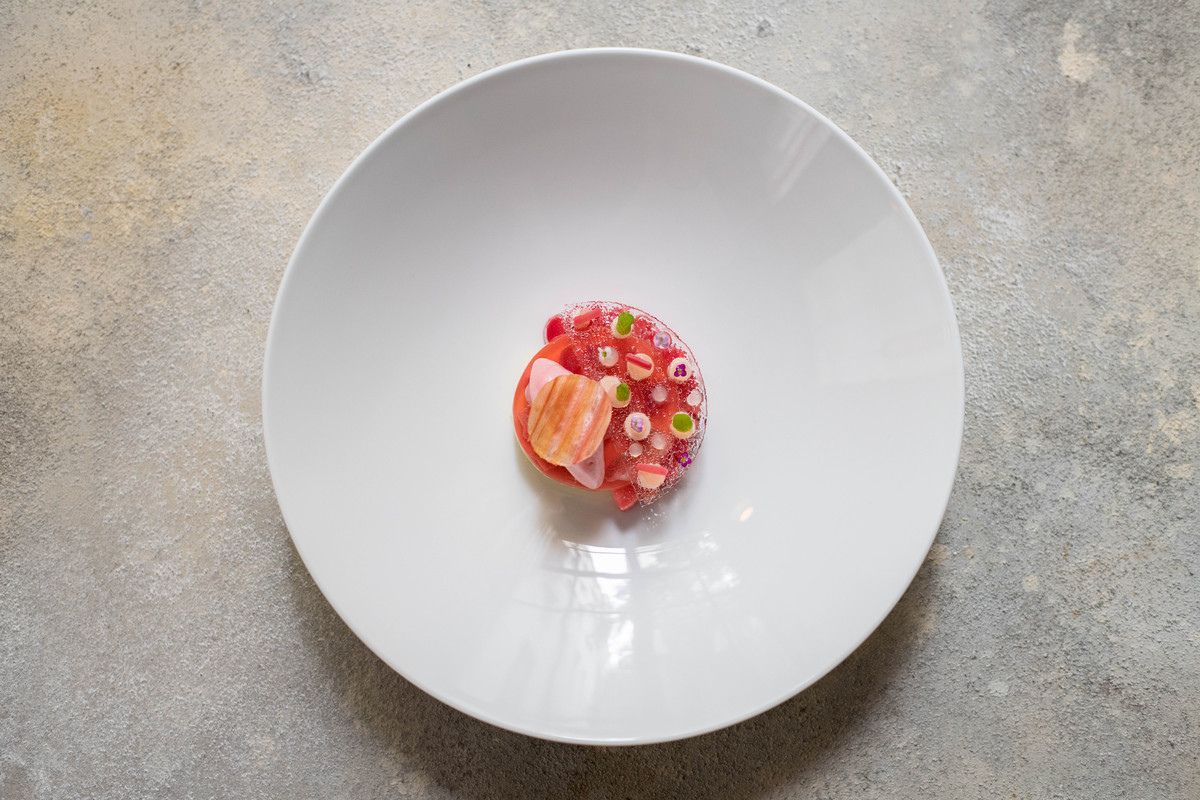 One thing that we will say, is that if you order either of the above dishes, make sure to save a portion of bread from the start of your meal. Trust us, you will want something to mop up the delicious juices that are left on the plate.

With our starters, also came our first wine pairings – a deliciously bubbly rose champagne for the heirloom tomatoes, perfectly complementing the bright acidity of the dish. And for the clams, a real stand-out white – Organic Marlborough Chardonnay by small-batch producers Deep Down, based in New Zealand. It possessed notes of ripe stone fruits with tropical pineapple, complemented by a creamy texture and balanced by a zesty acidity, ideal for seafood.

After time to pause and digest, our main dishes were presented to us: baby artichoke and wild rocket risotto, with mushroom pickles and hazelnut praline, and beef ribeye with crispy potatoes, young salads and beef jus.

Once again, our waiter introduced each dish, walking us through the ingredients, components and flavours. The risotto was a real sight to behold – gorgeously green from the rocket pesto, with little bursts of orange and white throughout.

The flavours worked a sort of magic on the tongue – the meal was both savoury and sweet, as well as creamy and fresh all at the same time. The mushroom pickles added that little extra, giving the dish even more prowess. It was paired with a crisp sauvignon blanc that was richer than most – the perfect drink to wash down the indulgent dish.

The steak was an artwork, arranged on the plate in little cubes with potato spirals dotted around, and shards of lettuce striking boldly into the air. Paired with a bold red wine that complemented the richness of the meat, the beef was charred and tender with a perfect texture and flavour. The potato wheels were soft in the middle and lovingly crispy on the outside. All in all, the combination was absolutely spot on.

After consulting the dessert menu, and asking Ayumu and Sho for their recommendations, we both opted for the panna cotta. And just as the heirloom tomatoes were not just any tomatoes, the panna cotta was not just your average panna cotta.

Made with candied ginger, the dessert was served with delightful rose poached rhubarb, ginger crumble and zesty rhubarb sorbet. Who knew that so many different flavours could work so well together? It was a marriage of tastes in the mouth.

In line with the sweetness of the panna cotta, the beverage brought out to us was a tasty dessert wine, slightly viscous in the mouth, with a sugary tang to complement our final course.

After polishing everything off, we were left to talk between ourselves, and surprised with a special little treat in true French style – petit fours cones filled with fruity berry compote and light cream. Served upright in pots of nuts, the sweet was the ideal way to finish off our experience.

And really, dining at CORD truly is an experience, not merely a meal out. There is so much attention to detail and so much passion behind every choice that you feel completely immersed and enveloped in the care taken by staff.

You are guided along a gourmet journey where new flavour combinations are presented to you, challenging what you might consider to ordinarily work on a plate.

Everything, from the sophisticated setting to the superb service, was expertly executed, and we will definitely be returning. A perfect place for a special occasion, CORD by Le Cordon Blue is top of our lists for fine dining in the City of London.