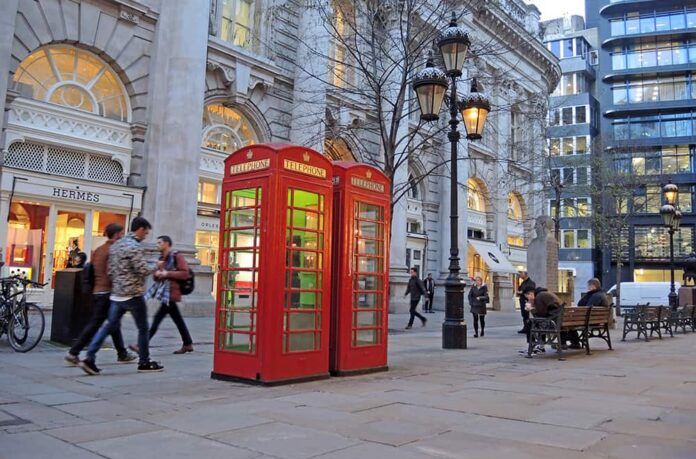 THE City of London has rejected applications to convert iconic public telephone kiosks near the Royal Exchange into retail units selling ice cream, coffee and other products.

The Red Kiosk Company, which specialises in converting inoperative telephone boxes into retail, advertising or commercial units, was denied planning permission by the Corporation’s planning and transport committee on 30 January.

The company was looking to convert two Grade II listed telephone boxes, located to the east of the Royal Exchange between Cornhill and Threadneedle Street, and one (non-listed) on the south side of Lothbury. All three boxes are within the Bank Conservation Area.

The plan was to turn the boxes into retail units, with members of staff standing outside them serving customers.

Delighted to announce that @SpiersSalads is open for business in Bloomsbury Square! Another great retail kiosk idea! pic.twitter.com/rw4Xh2rOvJ

The committee said that the redevelopment would detract from the significance of the telephone boxes as heritage assets. They also anticipate footfall at these locations to increase over the next 10 years, which is why they found that “the proposed use would obstruct the highway to an unacceptable degree”.

The decision didn’t come as a surprise to Red Kiosk Company director Eddie Ottewell, but he said he wouldn’t be giving up on the plan.

“We’re either going to amend the applications, or appeal the decision of the committee,” he said.

When asked what kind of outcome he anticipates, Ottewell said: “You can never be 100% certain, but the planning office at the City of London has so far been very supportive of us, so I’m sure we’ll be able to come to an agreement.”

He added that the company had already received planning consent for the redevelopment of a telephone box at London Wall.