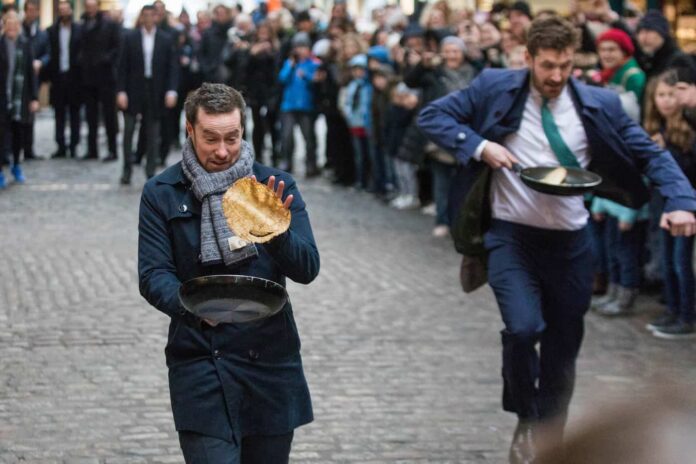 It’s been almost 2,000 years since the Romans kept London’s feisty masses fed and entertained with their policy of ‘Bread and circuses’.

On Shrove Tuesday, Guildhall Yard (site of the City’s Roman Amphitheatre) was once again the venue for a public spectacle in the form of the 14th annual Inter-Livery Pancake Races.

Heavy rain meant Guildhall Yard was too slippery for the traditional relay so it was a flip to the finish line that eventually saw the Worshipful Company of Actuaries emerge the overall winner and claim the ceremonial frying pan.

The Inter-Livery Pancake Races are organised by The Worshipful Company of Poulters and raise money for the Lord Mayor’s Appeal, which supports a range of charities under the banner ‘A Better City for All’.

A total of 41 organisations were represented in this year’s races, including 38 Livery Companies, the City Livery Club, the Guild of Young Freemen and a team from 601 (County of London) Squadron of the Royal Auxiliary Air Force celebrating the 100th anniversary of the RAF in 2018.

Aside from the participating teams, several of the Livery Companies support the races in practical ways, such as the Gunmakers who provide and operate the starting cannon; the Clockmakers who keep time; the Fruiterers providing lemons; the Glovers providing gloves and the Poulters providing that most necessary element – the eggs.

Despite the inclement weather, there was a good turnout by the public and fellow members of the Livery Companies. The efforts of the runners, some of whom participated in multiple heats, were greeted with encouraging cheers that spurred them to eggcelerate!

Possibly the most entertaining of the races was the Novelty race in which participants wore some truly eggstravagant costumes, with the Furniture Makers claiming victory in the fancy dress competition.

Meanwhile, a few blocks east, City workers and market tenants teamed up to run their own race undercover at Leadenhall Market.

More than a dozen teams took part in the relay race, but the City of London Corporation’s ‘City Flippers’ eventually took glory in front of a good turnout of spectators, despite the bitter weather.