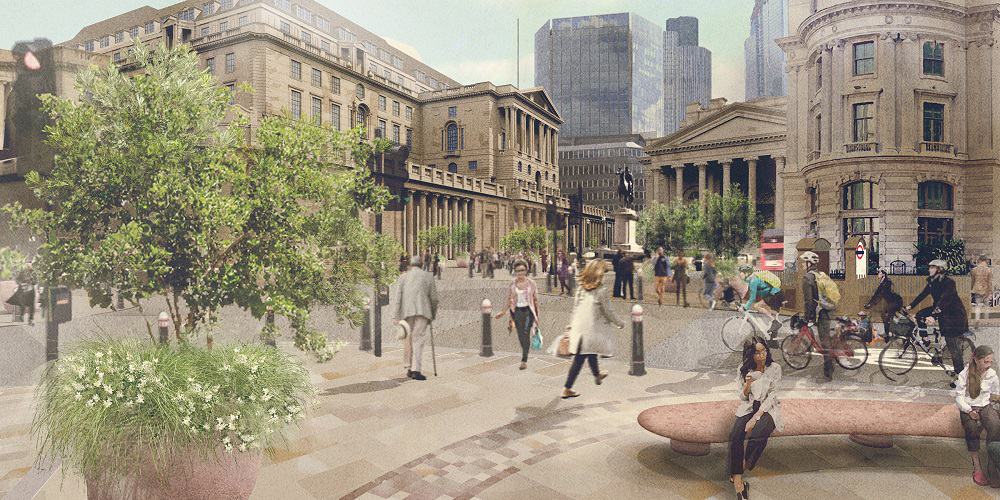 The City of London Corporation has launched a public consultation on proposed improvements to Bank Junction, scheduled to coincide with the re-opening of the improved Bank station.

Transport for London (TfL) has been upgrading and expanding Bank and Monument stations since April 2016, with works scheduled to be complete by late 2022.

As part of the All Change at Bank scheme, and in order to cater for the increased passenger capacity within the modernised station, the City Corporation is looking to improve safety and comfort on streets around station entrances.

The proposed All Change at Bank improvements include:

The design provides space for transformative public realm enhancements including greening and seating. It will also improve street safety, particularly for pedestrians and cyclists in line with the City Corporation’s Transport Strategy.

The City Corporation considered dozens of potential options and the proposal now out for consultation was deemed the most practical, while also offering the most substantial benefits for City residents, workers and visitors.

Chair of the Planning and Transportation Committee at the City of London Corporation, Alastair Moss, said: “Bank Junction has already undergone transformative change, from a busy and dangerous intersection to a safer and more pleasant environment for all.

“This proposal further builds upon those changes to continue the progression toward creating a world-class welcoming heart of the Square Mile, bounded by the iconic Bank of England, Royal Exchange and Mansion House.

“By making subtle changes to just a few of the arms of the junction, we will ensure the streets are even safer for pedestrians and cyclists, as well as being able to provide welcome improvements to the public realm in this busy part of the City.

“We encourage all of those who work, live and visit the City to provide their thoughts on the plan as we look forward to welcoming more people back to the Square Mile as the lockdown restrictions are eased.”