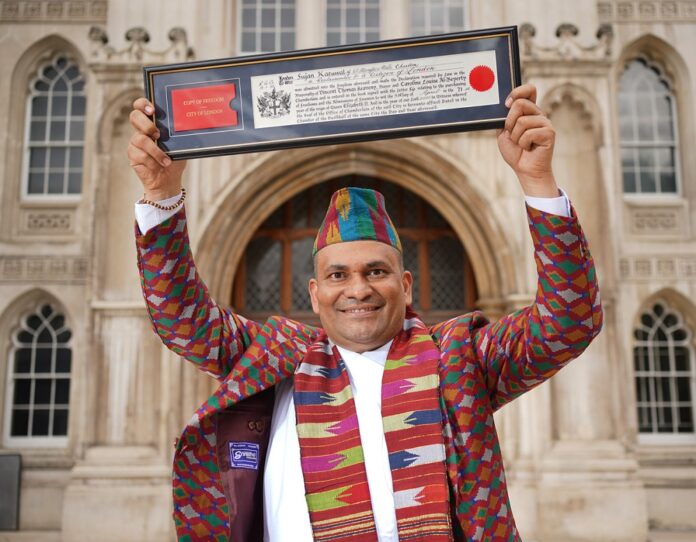 A local chef has been given the highest honour from the City of London for his work during the pandemic.

Sujan Katuwal, 47, who cooked 100,000 meals for emergency workers in the pandemic, has been given the Freedom of the City award.

Katuwal decided to use his Nepalese restaurant Panas Gurkha in Lewisham to feed those on the front lines of the pandemic, and has now received the coveted award bestowed only upon valued members of the community.

Waking up at 5am every morning, Sujan would work tirelessly to cook his “mum’s curry” for doctors, homeless communities and even armed forces who had been deployed across South London.

He said: “It’s been a beautiful journey which started by giving back to the community. I didn’t want people to think we had closed the restaurant. We started cooking in a crazy way.

“I have huge admiration for front-line staff who often work long hours under immense pressure. It feels fantastic to have supported them – and put a few smiles on faces.”

Joined by his wife Bandana, 43, son Shivang, 16, and daughter Subani, 12, at 7am Sujan would work through till 1pm before delivering curries to various sites. Each day the family would cook between 1,500 and 2,000 meals. Uncertain of what meal would be easiest to cook in vast quantities Sujan consulted his mother Sushila who lives in Nepal.

The 72-year-old recommended a chicken and tomato curry and the dish became so popular it is now a speciality at Panas Gurkha and appears on the menu as “mum’s curry”.

When asked what the secret ingredient was Sujan explained it tastes so good because it is tended to with love for hours.

He added: “It’s a very simple dish, you just cook it from the heart. It’s just love and affection.” To start with the family made the 10-minute drive over to Lewisham hospital to deliver meals to the staff but after Sujan and Bandana were brought to tears watching a BBC interview with a homeless shelter manager they also started delivering to the homeless too.

Sujan then began volunteering twice a week at his local homeless shelter and he still regularly goes to ensure Londoners have at least one hot meal a week. The chef has now set up a charity called Panas Helping Hands to keep doing his important work and the charity even boasts actress Joanna Lumley as its patron. The star recently celebrated her birthday at Sujan’s restaurant.

After moving to London from India in 1998 Sujan managed top Hotels in Piccadilly Circus and London bridge before opening his own restaurant 12 years ago. To celebrate his work the chef was invited to the Guildhall yesterday (April 5) to receive his latest accolade – he previously received the Queen’s Award for voluntary service in 2020.

Speaking about the visit he said: “Going to the Guildhall was such a welcome. I didn’t expect that as an outsider. I came from a very humble background in Nepal. The book I signed [at the Guildhall] had been signed by Churchill and Princess Diana.”

A City of London Corporation spokesperson said: “We are delighted that Sujan has been awarded the Freedom of the City. It is richly deserved. His selfless actions are an example of how communities can come together and overcome hardship.

“Sujan has dedicated himself to helping make London a better place and it is fitting we recognise his commitment as well as the positive impact he has had.”