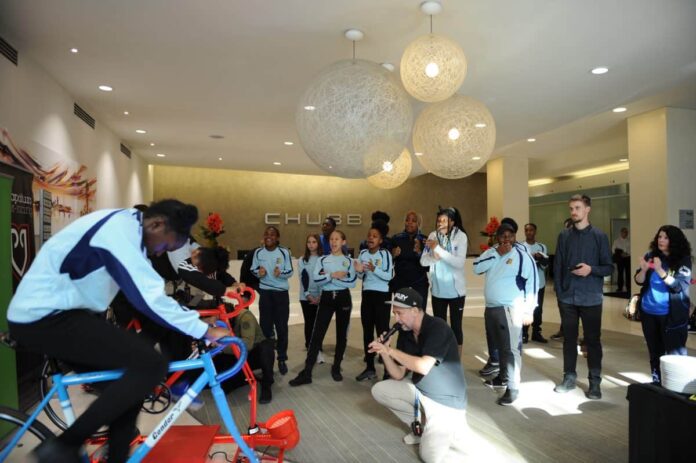 The reception foyer at Chubb HQ was a hive of activity on Wednesday as youngsters from London Youth rubbed shoulders with City suits at a networking and social mobility event.

Organised by Kirat Nandra, a credit control manager at the insurance giant, and supported by some friendly competition on static bikes courtesy of Rollapaluza, the day marked the conclusion of a series of events designed to open up the opportunities of the Square Mile to youngsters from less privileged backgrounds.

“It’s all about smashing the glass wall,” said Kirat, who was inspired to collaborate with the London Youth charity after falling victim to youth violence, something she aims to help combat by showing people a different path.

“I asked what was actually being done, and then what we as a business could do to help. This is something that has never been done before by any corporate and, alongside team building and opportunities to connect, it also brings different communities together too.”

A bike maintenance workshop also ran through the morning, arming keen cyclists with knowledge to better look after their equipment.

More than just a tick in the corporate social responsibility box, Kirat wants to build on the success of this campaign and help foster a wider positive attitude toward social impact.

“We aren’t here to give youngsters a great time and then say goodbye. We wanted to create a project that would provide longevity and make a difference not just to them, but to the people they come into contact with in their communities.”

Teens took to the saddle of static bikes in the hope of being the fastest over 250m, some hitting speeds of 50mph as they powered their way up the leader board.

Those competing in the ‘finals’ event were offered the chance to join Chubb for a work experience scheme, further introducing them to careers they may not have previously considered or known about.

Eileen Castolene, Chubb’s director of operations for Europe, Eurasia and Africa, said she was impressed by the levels of camaraderie shown by London Youth’s youngsters.

She explained that The ‘Life Cycle of Events’ challenge was a new endeavour as an extension to Chubb’s existing work on social mobility, which includes a focus on reaching young people and people reentering the workforce, such as helping veterans who are leaving the military.

“It came out even better than I thought it would. Kirat put a lot of work into this, but I am still so surprised at how this has come together with the energy, not only of the youth groups, but of Chubb.

“This was really important as our first effort at this kind of event.

“Insurance is not the first industry that a lot of these young people would think about, but as they hear about all the various functions that make up our business they start to take a different view of us.”