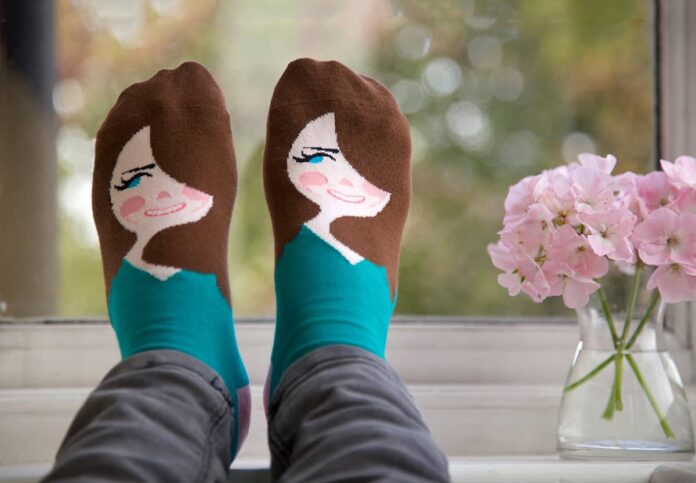 The study by the Social Mobility Commission found City workers should stick to safe, conservative styles of dress to succeed in the finance industry, asserting that ‘polish’ still helps you get ahead in the Square Mile.

One beacon of hope for those concerned about flashing a little flamboyance is that the report made no mention of any jobs lost over that slither of fabric visible between the trouser hem and a classic Oxford.

The ‘crazy sock’ has always been one of the stronger weapons in the arsenal of those feeling repressed by the Square Mile’s working wardrobe.

And while these fun little freedoms of expression have taken pretty much every form as they drift in and out of favour, one Barbican-born brand has taken the head-to-toe concept literally.

Some, like ‘Andy Sock-hole’, ‘Brad Feet’ and ‘Kate Middle-toe’ are inspired by celebrities, while others, like ‘Don Cottone’, are designed for the wearer to unleash their inner ‘Sockfather’, diva or scientist.

The brand was conceived in 2013 by Gil Kahana and Humberto de Sousa, friends from University of the Arts London who were keen on injecting a bit of fun into impending adulthood.

Gil says the pair were joking around at a friend’s party when they came up with the idea of ‘faces on feet’.

“I could see it in my imagination and even wiggled my toes as if they had characters on them already,” he recalls. “Not everyone got it but I spoke with my friend Humberto and we decided to give it a go.

“We agreed to meet once a week at the Barbican Centre and started to progress the idea bit by bit.

“I remember the session where we came up with the name and also when we briefed our designer friends about creating the first character for us. It was a magical period that was exciting and naive in a good way.”

After nailing the illustrations with the help of some friends in design, and muddling through the usual struggles of finding the right supplier, the pair took their ‘characters’ – Prof. Brian Sox, Mr. Grrrril, Miko and Murdoc – to market, trialing the product at Spitalfields and Camden, as well as online using flash sale sites.

“We sold a few thousands pairs [online] in just three days and realised that when you put ChattyFeet in front of the right audience it can work really well.”

Today the ChattyFeet family has grown to 33 different characters, as varied as their audiences at the likes of the Tate, Barbican and Science Museum and, most recently, directly adjacent to the City crowd at UAL alumnae retail space Not Just A Shop.

Gil and Humberto are now gearing up for the busy period as a brand that specialises in the original ‘stocking-stuffer’, and say that while gifting makes up a significant percentage of sales, some buyers just want to treat themselves.

“The reason we started was because we thought that there weren’t enough opportunities to get silly as an adult,” Gil says. “There are plenty of people who agree with us.”