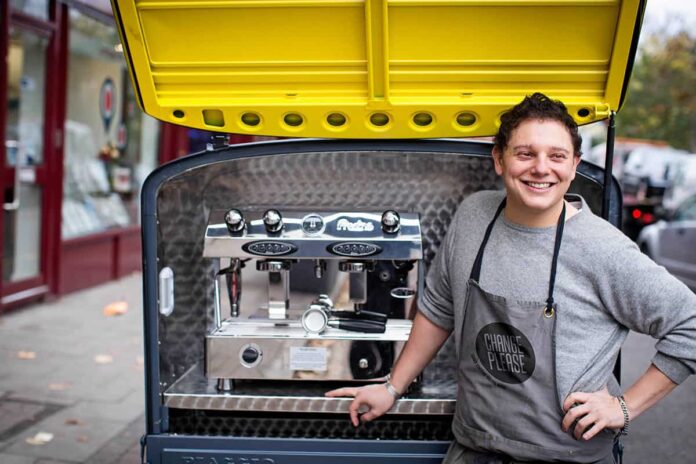 Sparking meaningful change in society is no mean feat, so turning to a pipping hot cup of coffee in the early stages to find the adrenaline needed to break barriers is a decent place to start.

What former City worker Cemal Ezel probably didn’t expect when he was punching in and out as part of the Square Mile grind was that he’d soon be changing lives through the very substance that fuelled his morning journeys to the office.

During a trip through Vietnam, Cemal was rocked by a revelation that he was discontent with his life and, without yet fully realising it, wanted a new perspective.

“I met an American who asked what I did,” he says. “I told them about working in the City, not being that happy with it all.

They told me about the rocking chair test – think about yourself in a rocking chair at the age of 90, what you did, who you helped and how you’ve made the world a better place. I realised what I was doing was all negative, that I was only looking out for myself.”

And so the seeds were planted for Change Please, a social enterprise that trains and supports homeless individuals into paid work as baristas.

Shortly after his epiphany Cemal visited a silent teahouse, run by deaf and mute women. He described it as “a beautiful, peaceful space” where the only sound was the running water of the Japanese garden.

“I realised that you could run a business and do good at the same time,” he explains. “When I came back I was set on starting a silent teahouse in Clapham – but then I realised that I didn’t really like tea.”

Cemal decided to reassess, and created his own model that would go on to create significant ripples in central London.

“Coffee is more commercial and I like coffee,” he says. “I also owned properties and I realised that I could do something to help homelessness. Housing was an easy thing that I could provide, and coffee could let me also give people a job.”

Cemal saw an advert for the School for Social Entrepreneurs and with help was able to quit his job and start on the journey to create Change Please.

Clients receive 12 weeks of training alongside a mentor, learning everything from crafting the perfect cappuccino to cashing up. During the course they’re paid the London Living Wage, provided with a place to stay, and even helped to set up a bank account.

“We had one guy, he used to run a consulting business. He was in his late 40s, early 50s when he went through a divorce. He lost his business, was depressed and ended up on the streets for two years.

He read about our work in the Guardian – he came on our training programme, eventually becoming a mentor barista and then our sales director. He’s since moved on, but we helped him to get back on his feet.”

Since 2013, trainee baristas have been operating pop-up stalls across London, bringing in a profit from selling coffee.

Cemal is also increasingly doing more work with corporates, both setting up stalls in big offices and selling into supermarkets.

“When you first start a business you’re always asking yourself: why has no-one else done this?” said Cemal, who has since started three other social ventures, including two restaurants.

“This is the most dangerous part for new entrepreneurs. You’ve got to trust your conviction and gut.”

Change Please is currently partnering with Centrepoint to support 18 to 25 year olds. The aim is to make a difference to people’s lives at an early stage, before things can get worse.

The man behind it all is encouraging others to hold no fear if they truly wish to pioneer the change they want to see in the world.

“Going from those initial fears to the reality of creating the idea and seeing it working was fantastic,” he said.

“For me it was seeing people who were on the streets two weeks ago being paid to be trained, getting the keys to a house, entering a pin into an ATM. It goes from being an idea in your head, to a thing you can feel in your heart.”