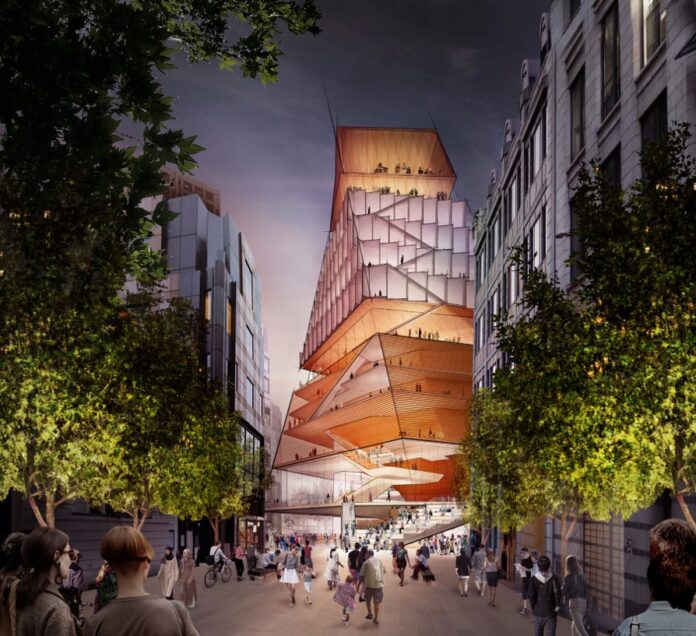 The City of London Corporation has agreed to provide further funding for the next stage of development for the proposed Centre for Music.

The Court of Common Council, the City Corporation’s top decision-making body, approved the release of £1.95million to commission continuing work on the proposals, including the funding model and technical studies to inform the site’s masterplan.

The new world-class venue for performance and education, designed by New York-based architects Diller Scofidio + Renfro, would be built on the site of the Museum of London, which will relocate to West Smithfield.

The project masterplan aims to transform the area, paving the way for extensive regeneration and giving greater priority to pedestrians. The roundabout would be removed, additional ‘highwalks’ built, and public access to the historic Roman Wall improved.

The City Corporation has now pledged £6.8m in funding for work related to the proposed Centre for Music, including a detailed business case into its viability, and plans on design development, fundraising, business modelling, and capital funding.

The business case envisages a business model with no public subsidy required for the Centre’s running costs; instead, operational costs would be met through commercial opportunities provided by new spaces within the Centre. The next stage of work will include a robust and detailed Capital Funding Model.

“Attracting outstanding performers and diverse audiences, as well as engagement from creative businesses, the Centre would bring much-needed regeneration to this area of the Square Mile and as a major project, represent placemaking for the twenty-first century.”

“The £1.95m funding package from the City of London Corporation enables us to develop plans in more detail. Working with our design and technical team, we can now move forward confidently with the next stage of the project’s development.

“The Centre for Music would play a key role in widening access, developing skills, providing jobs and training, and bring about positive social outcomes, reinforcing the vital role that music plays right across society.”

The City of London Corporation is the fourth largest funder of heritage and cultural activities in the UK and invests over £100m every year.

The authority is providing a £197m investment in the new Museum of London, which will open in West Smithfield in 2024, and £6.8m to support the development of the proposed Centre for Music.