Captain Tom Moore has broken a few records in his time, raising more than £33million for the NHS and becoming the first 100-year-old to have a number one record in the charts. He broke another one by becoming the first person to be awarded the Freedom of the City of...

Captain Tom Moore has broken a few records in his time, raising more than £33million for the NHS and becoming the first 100-year-old to have a number one record in the charts.

He broke another one by becoming the first person to be awarded the Freedom of the City of London in a virtual ceremony – the first ever because of the coronavirus pandemic.

The centenarian became the “youngest freeman” (at least temporarily) in a centuries-old ceremony which saw him read out an oath of allegiance.

But because of the coronavirus pandemic he appeared with his daughter Hannah  Ingram-Moore via videolink from his home in Buckinghamshire.

True to form the former soldier who has captured the nation’s imagination with his cheery determination and slogan “tomorrow will be a good day” responded to the praise of the City by saying: “It’s an honour to speak to you.”

He was told about the honour on his hundredth birthday last month when he was given an RAF flypast and awarded the title of honorary Colonel. He also received a Blue Peter Gold badge – which he wore for the ceremony.

His record of You’ll Never Walk Alone recorded virtually with Michael Ball and the NHS Choir also reached number one.

The ceremony was conducted by the Chamberlain of the City of London Dr Peter Kane and the Lord Mayor William Russell also participated.

They paid tribute to his determination as the war veteran pushed his walker through his garden raising money for essential support for the NHS and volunteers along the way. 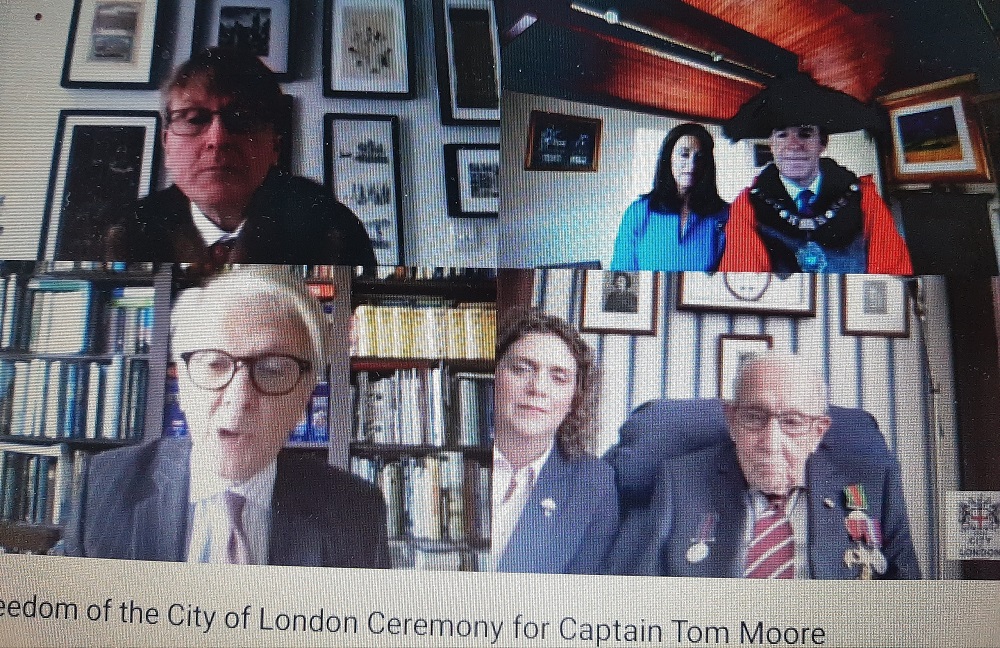 The Lord Mayor said: “Not only did you do that but you have raised the spirits of the country along the way.”

Dr Kane said: “Captain Moore, you are a national treasure and you have inspired the nation at this difficult time.”

He said: “There could not be a better cause for the carers. You have lifted their spirits and the spirits of the nation.”

He also presented him with the traditional copy of the Rules for the Conduct of Life drawn up by a former Lord Mayor in 1740 which is given to freemen.

Dr Kane said: “Some would say you have done rather well without the rules.” He said he looked forward to presenting the copy in person when the pandemic is over.

Captain Tom follows in the footsteps of Sir Nicholas Winton, “The British Schindler”, who was awarded the Freedom when he was 105 for bringing hundreds of children to safety from the Nazi regime.

And the City’s clerk Murray Craig told him he also is in good company.Victorian nurse Florence Nightingale was also awarded the Freedom.

Captain Tom has opened a Nightingale Hospital virtually which was set up to cope with coronavirus.

Edward Jenner, who developed a vaccine for smallpox, as scientists are working to find one for Covid-19 also had the Freedom, as did wartime leader Sir Winston Churchill.

“Dare we say he exhibited the same bulldog spirit in terms of adversity as you,” said Mr Craig.