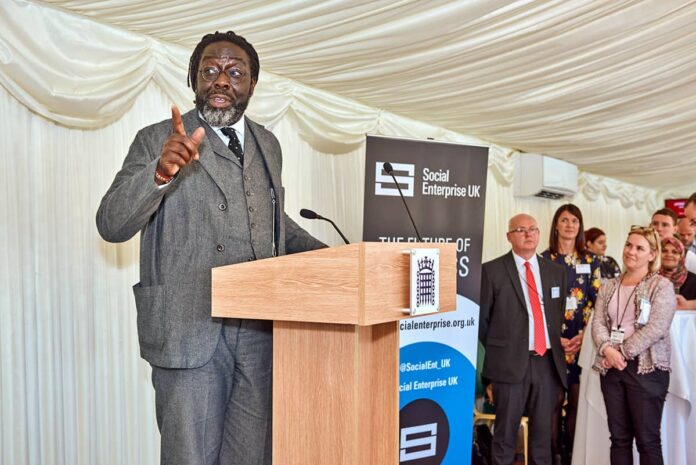 The catalysts behind the Buy Social Corporate Challenge have delivered their latest report card to the giants of the business world – and it makes for mixed reading.

The ‘Good but could do better’ assessment of the private sectors’ commitment to the adoption of social enterprise was made at the House of Commons by membership body Social Enterprise UK, who calculate that £45million has been spent with social ventures by some of the country’s biggest firms since the campaign began in 2016.

But that falls some way short of the £1billion target spend drawn up by SEUK chief executive Peter Holbrook and his team when they conceived the challenge, and he is using the latest update to persuade those who haven’t yet tipped their toe into the social pond to take the plunge and reap the benefits.

The scheme, supported by the Department for Digital, Culture, Media & Sport, and Business in the Community, seeks to redirect corporate supply chain spend into businesses which deliver social impact for some of the most deprived communities at home ad abroad. Partners include Amey, Johnson & Johnson, PwC, Robertson Group, Santander, Wates Group, and Zurich, recently joined by Linklaters, Mace, BP and LV=.

“Businesses are increasingly being held to account by their customers and their staff over how they operate, who they work with and the impact they are having on society, and the environment,” said Mr Holbrook, using the two-year-anniversary of the challenge to implore more firms to carry the standard forward.

“Traditional concepts of corporate social responsibility are often just not good enough, but what the Buy Social Corporate Challenge has done is helped catalyse a movement of large companies who are using their core business spend to create real positive impacts in the communities they work with and around the world.

“If we are to achieve our ambitious target of £1bn spent with social enterprises we need more businesses to get involved.”

The pioneering man at the helm described the social solution as a “win-win” for businesses on both sides of the equation.

And he says that the impact could be momentous if even half of the current FTSE 100-listed companies were on board.

“What the challenge has managed to achieve in the last two years has undoubtedly been impressive,” he said, hailing the champions of the sector.

“Just over a handful of companies have managed to create hundreds of jobs, weave social impact into their supply chains, and spend millions with social enterprises. Social enterprises are thriving, market-leading businesses, which also deliver significant social benefit. Our latest report shows that 100% of major corporates have found the services of social enterprises to be either as good or better than their previous suppliers with prices which are just as competitive.

“It makes sense that more corporates should sign up – it’s a win-win situation.”

And the numbers back up Mr Holbrook’s claim. As part of the challenge, social enterprises have been able to reinvest almost £3m profit into their social missions, helping to create 329 jobs.

Social enterprises benefitting from the challenge include Auticon, the market-leading IT consultancy which exclusively employs consultants on the autism spectrum; Change Please, a coffee supplier which creates sustainable jobs for the homeless; and Wild Hearts Office, a stationery supplier which supports female entrepreneurs in the developing world.

But it’s not just one-way traffic. Corporate partners have also reported benefits, including staff engagement, business development, and the increased positive perception of their operations.

David Adair, head of community affairs, corporate sustainability at PwC, a firm that has pumped £250,000 into social ventures over the past 10 years, suggested the success of the programme has been fuelled by the enthusiasm of staff wanting to make a difference.

“PwC is committed to widening opportunities and building a more diverse supply chain via social enterprises. The Buy Social Corporate Challenge enables us to increase our spend with social enterprises which support under-represented groups, and engage our staff.

“Both the Corporate Challenge and the Buy Social campaign have really struck a chord with people across the organisation.