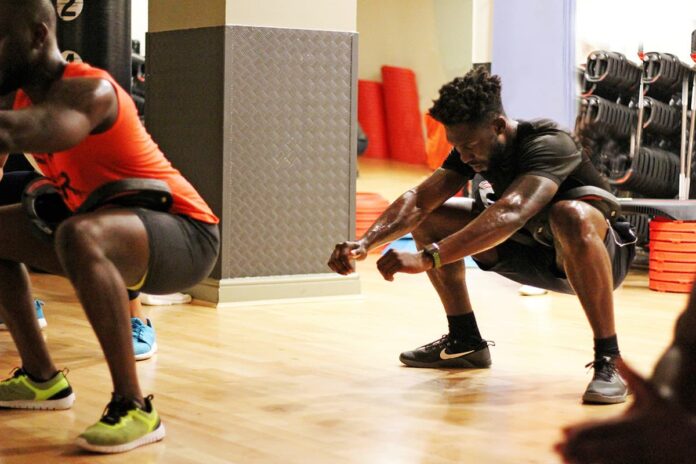 Sprinting from the office to make Soho Gyms’ 6pm ‘Broken’ class on a blustery Tuesday evening and the breaking has already begun.

The weekend is a distant haze of too much socialising, my inbox resembles a bird’s nest, it’s cold, raining, and I’m forced to weave between a few thousand people commuting like cast members in The Walking Dead.

Why, then, would one sign up for a fitness class that promises to crush what little remains of my zest for life under a couple of three kilogram weights? Make that four kilograms.

“This is the sort of class that pushes your to achieve a level of fitness you didn’t think you were capable of, then improve on it every week.”

What is it?
Broken is an intense cardio and strength-based exercise class incorporating cardio, resistance and floorwork and finishing with a burner move at the end designed to ‘break’ participants.

Instructors are tough, coaxing participants back down into a lunge long after they’ve given up and upping the weights if they spot anybody looking too comfortable. Developed for clientele that have more or less conquered Soho Gyms’ menu of Les Mills group exercise programmes, ‘Broken’ should leave you just that by the end of the 45 or 30-minute session. Not for the faint of heart or cardiovascular fitness.

How does it work?
Sessions start with plyometrics where muscles are forced to exert maximum force in short intervals through jumping, running on the spot and leg raises to get that heart rate going and increase power.

That’s where the straight cardio ends and the resistance comes in; deadlifts, curls and squats using plates, followed by floor work; either strength-based exercises like pushups and low-high planks or an abdominal series.

There are virtually no rests between sets as Tony points out that people at a certain level of fitness don’t often need regimented water breaks and will stop if and when they feel they need to. The final five minutes is designed to “bring the challenge out” in participants. Each class is given a specific move – in our case it was a weighted squat – and asked to hold it.

“The idea is that all that work is down to the last five minutes,” he says. “I know that sounds strange, but it’s challenging you to find an extra five minutes or four minutes or three minutes beyond what you thought you were capable of.”

As it turns out I’m only capable of just under three minutes before I crumple to the floor to watch the rest of the class drop like flies, but the last man, or should I say woman, standing at four minutes 30 seconds earns a round of applause once the feeling comes back into our arms.

“You might think being ‘broken’ is a bit negative, but it’s actually very positive – if a person can take the five minutes on, they are unbroken,” Tony explains.

“If you fail, that’s because you’ve worked the hardest that you can, and you’ll come back next week and beat your time.”

What are the benefits?
A tough, no-holds-barred workout that offers an excellent progress marker for anybody working towards a specific competition or goal, but want to keep training in a class environment.

Tony recommends the class once a week in conjunction with other gym or class-based training as a way to measure your development.

“This one move at the end tests everything – your strength, agility, flexibility, endurance – and shows your progress, which is quite hard to get from a class where you’re doing the same thing all the time.”

The challenge element is also a great way to push yourself; whether that be in competition with the clock (five minutes has never felt longer) or with last week’s winner.

Where can I try it?
Soho Gyms Tower Hill, 1 America Square EC3N 2LB