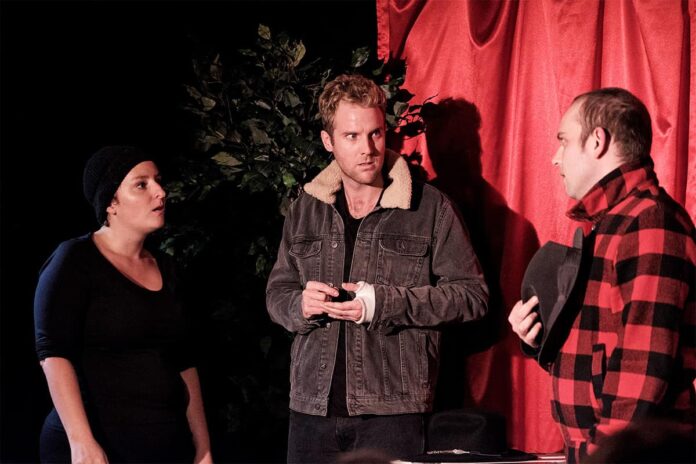 THE ground floor of a shiny new office development in the heart of Broadgate isn’t the most obvious place you might think to look for an independent theatre company, but then improv group The Nursery have always been pretty good at making it up as they go along.

The company has been running workshops, producing shows and introducing audiences to improv for more than a decade, their adoption of the leasing model taking their activities from a leaky railway arch right through to temporary office units.

It’s a transient existence for a company that is, in the arts world at least, well beyond start-up status, so when British Land offered the space to boost Broadgate’s creative credentials, Jules Munns and co-founders Judith Amsenga and Heather Urquhart jumped at the chance to start building a proper home.

“We have been looking for a more permanent performance space for a long time so there was huge excitement when this opportunity came up,” he says of the small theatre, which they share with performing arts charity Theatre Deli.

“It’s not forever, but we anticipate being here for two or three years with a bit of luck, which is enough time to build a bit of momentum from the shows and generate finances from the classes and rehearsal spaces so that we can bounce on to a venue with even more longevity.”

Improvised theatre is, by its very nature, a transient art form, with both audience and actor unsure of how the performance will turn out and no two shows ever the same. But Jules has seen the style gain a more permanent place in the minds of theatre-goers and those looking to get on stage themselves.

“When I started around 10 years ago, what little improv there was in London was very disconnected, just a few small groups,” the former Guildhall School of Music & Drama student explains.

“Now, there are four or five major groups in London, and so many more people doing professional quality work.”

The genre’s newfound popularity is thanks, in no small part, to the recent West End success of Showstopper! The Improvised Musical and visibility of the likes of US actors Tina Fey and Amy Poehler who got their start on the Chicago improv scene as alumnae of famous troupes like Second City and iO Chicago.

Jules says the “industrial scale” of stand up comedy in the UK has also led people to start looking at improv as a more accessible and collaborative alternative, and the personal and professional benefits are also gaining wider recognition.

“There’s a growing awareness of how improv is actually a fun way to work on yourself; improve your charisma, your confidence, help you think faster, solve problems,” he says.

“Some people have even drawn connections with mindfulness and meditation; the future and past cannot exist when you’re on stage because you have to live in the now.”

But a large portion of the credit is due to the small group of people who have pushed improv from its beginnings in the UK, the founders of the Nursery Theatre among them.

Now they are trying to expand its appeal further by commissioning and promoting more ‘genre-based’ shows as part of the ‘Nursery Originals’, like the current Twin Peaks-inspired The Owls Are Not What They Seem showing this month.

“There are elements of improv to [the show] but with the release of the remake it’s also a very visible piece of intellectual property right now so there’s an element of trying to capitalise on that,” he says.

“Improv is quite problematic because the audience never quite knows what sort of show they’re going to get, we want to expand it beyond people who are just fans of improv to people who are interested in certain genres.”

Another way The Nursery is reaching new audiences is online; live streams of their shows attract hits from all over the world and the group’s YouTube videos have notched up thousands of views in an effort to make improv more accessible to those who aren’t able to get to a show.

In this home, or the next, the Nursery’s aims remain unchanged.

“We want to do what the Comedy Store did for stand up in the ’80s; they are the ones that brought comedy out of the backrooms of gentlemen’s clubs and into the mainstream,” Jules says.

“We want to be that same go-to for improv.”

The Owls Are Not What They Seem is on 17 November and 1 December at The Nursery Theatre, 2 Finsbury Avenue EC2M 2PA