Walk into any major bookshop chain and you’ll find a fairly standard layout.
New releases and best sellers towards the front, fiction and biographies in the middle, big sections for art, food and travel, and the history books buried somewhere in the back.

Things at Brick Lane Bookshop are refreshingly back-to-front with London and local history books occupying prime real estate in the front corner ahead of the new release fiction, travel guides and gluten-free cookbooks.

The independent bookseller is home to one of the largest collections of East End history books, making it a must-visit ahead of Historic England’s inaugural London History Day on 31 May.

Brick Lane Bookshop has had one eye fixed firmly on the past since it was established, first as the trading arm of community arts organisation Tower Hamlets Arts Project (THAP), back in 1977.

One of THAP’s aims was to offer a platform for working class writers who were under-represented by the literary mainstream; publishing work and giving it shelf space in the adjacent bookshop.

Founding member and current owner Denise Jones recalls THAP’s early writers’ workshops were dominated by discussions of the area’s past.

“History and heritage have always been important to us because it was important to the people who were writing for us,” she says. “Those people were particularly interested in sharing oral histories – either their own or those of people in the community – so that was what we published.”

Four decades later and the interest remains, from locals and, increasingly, tourists as the area further expands its reputation for a lot more than slums and one prolific serial killer (Jack The Ripper is, begrudgingly, afforded a small section of the shop due to demand). 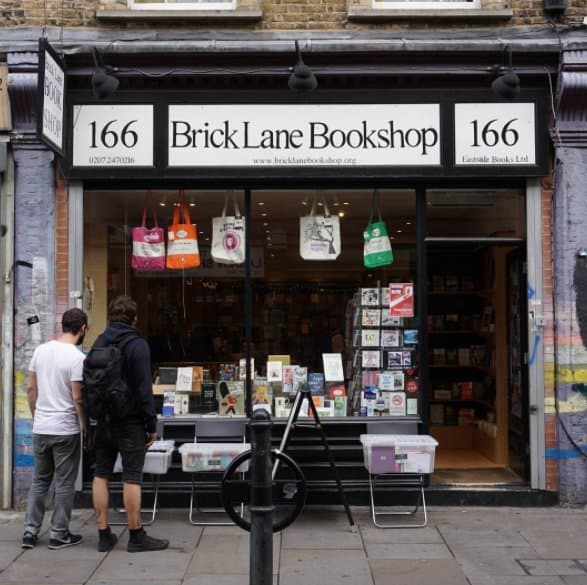 Today, photography books of Hackney hipsters now have their place alongside the mainstream historical fiction titles and paperback memoirs of locals, and the bookshop has had to create an entire section, right by the front door, dedicated to East London street art.

But the locals are still telling stories; one of the shop’s bestsellers is East End Backpassages by Alan Gilbey, BAFTA award-winning screenwriter, lifelong Eastender, and the first person THAP Books ever employed behind the counter.

“Alan was about 16 at the time and so shy he hid behind the counter whenever anybody came into the shop,” Denise says. “His is an alternative guide to the East End – the history is right but it’s really funny  too.”

Columbia Road resident Linda Wilkinson continues her chronicles of the street before it became London’s most Instagrammed flower market, and journalist Kate Thompson has penned a fiction series based on the stories of three Bethnal Green seamstresses who worked at the Singer factory in the 1930s. All have their place on the shelf here.

“The East End has always been a point of arrival for immigrants, it was a big part of history for Jewish people, the Bengalis, the Chinese… the cultural aspect is still very important.

“We think it’s really important to keep people informed of the area’s heritage through the eyes of all its different ethnicities and through the written word, through stories.”