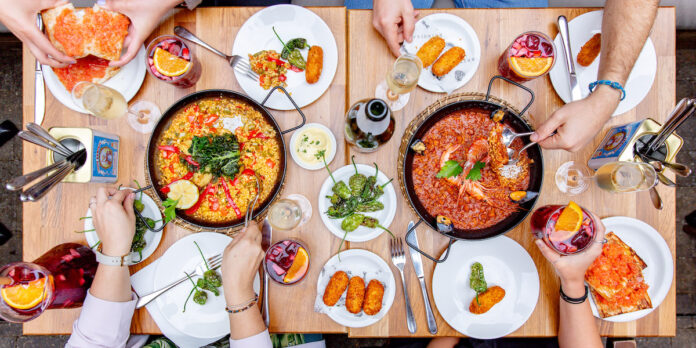 London is the home of whole heap of random food experiences – especially when it comes to ‘bottomless’ dining.

And now Brindisa in Shoreditch are throwing their hat into the bottomless ring – offering up a massive sharing pan of paella, a bunch of starters and a never-ending supply of sangria and cava to lunchtime diners. But this is a much classier affair, compared to a lot of other similar experiences – you won’t be surrounded by noisy youths getting wasted.

Festivities kick off with pane de coca (fresh tomatoes on toast). This is a classic Spanish dish which we love for breakfast. It comes served alongside a decent portion of ham and cheese croquettes. These hot balls of salty dairy and meat are heaven. We could have chowed down on an entire bowl of them for lunch.

Alongside these, comes a heaped plate of padrón peppers dusted in salt. They’re like the Spanish version of edamame snacks. This all exists to prepare the stomach for a huge paella. The size of the pan depends on the size of the party – the more guests you bring down, the larger the pan. A few diners around us had theirs carried out by a team of muscular waiters.

Either go for vegetarian or seafood option. But we always recommend going for the squid, prawns and mussels. Vegetarians can go pescatarian for a day right?

The size of this bad boy is mightily impressive but we could have done with a few more prawns and mussels. It is hard to complain when you’re getting it all for just £35 per person though. Nonetheless, we’d happily fork out a few more pounds to fill it up with extra fish.

And it’s the perfect dish for big groups. The spectacle of simply shovelling out rice and passing it around the table is good fun.

Add unlimited alcohol and you’re sorted. But  we were a touch disappointed with the sangria. It was a bit more like a fruity juice than a boozy sangria – good for drinking lots of but we felt no buzz by the end of the 1.5 hours.

While we didn’t want to get sloshed, we certainly expected to stumble somewhat as we made our way through the restaurant and outdoor terrace. Or down to the bathrooms. We just wanted it to be punchier. The cava is pretty decent though. They’re using the Mirame Brut which is far above the cheap and nasty stuff you get at your local Tescos.

They even leave the entire bottle at the table, so you don’t need to wait for waiters to top you up. That’s a massive win! For most servers at bottomless brunches purposely take their time with refills. Brindisa aren’t trying to hold you back here. It’s just you against the time limit. Challenge accepted.