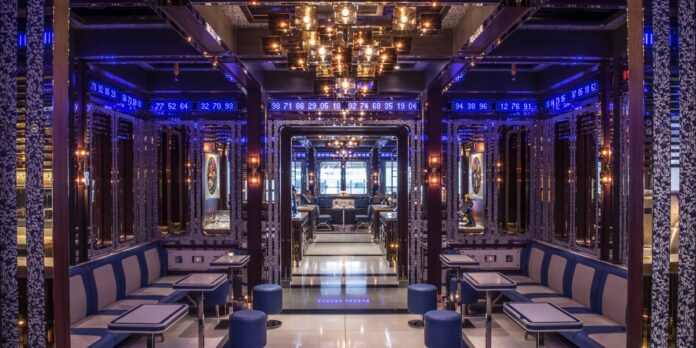 Everything here is so unnecessarily shiny and glamorous – and we’re so into it.

Head to the Cheesegrater and take the private glass lift (which had to be slowed down to stop people from getting motion sickness) up to the Bob Bob Cité reception area. Immediately, the entire space smells like a brand-new luxury car (leather, wood polish and just general newness). They have been open for only a few months so that is expected.

And as you move in about the space, you come to find a strange transport theme woven throughout. The doors have glass port hole windows through them as if you’re on a ship, the waiters and barmen are dressed as if they’ve been plucked off the Titanic, and the dining rooms are set up like you’re on a futuristic (yet somehow 1920s inspired) first-class train.

They even have the famous ‘presser pour Champagne’ buttons on each and every table which act like the service buttons on airplanes.

It’s all a whole lot of fun. But very serious too. It’s a high-end restaurant, specialising in vintage wines and French cuisine. The staff are at the top of their game, giving incredible service. Their perfectly tailored uniforms are starched to perfection and each person in the team still holds on to some personality – because no one likes a stuffy waiter who doesn’t know how to have a little giggle.

But back to that Insta famous press for Champagne button. Even if you can’t justify the purchasing of some of the magnum and methuselah-sized wine bottles (seen through some of the cellar port holes), you should at least get some of their fine vintage Champagnes. Spending a little extra here will go a long way.

After all, you don’t come to Bob Bob Cité to be thrifty. You can live on rice and toast for the rest of the month if necessary.

Once you’ve satisfied your urge for bubbles, you can either get some fresh oysters or crack on with the three-course feast awaiting you. They do a few British classics – the beef Wellington is a piece of artwork – but you come here for the top-notch French cuisine.

The snails are a welcome treat of garlicy, buttery goodness – coming in their own specially made dish with little holes for each individual snail. Because why not? They are also perfectly cooked, holding on to none of that usual rubbery texture you get when dining at tourist traps in Paris.

And while this dish is super rich, the rest of the offerings are surprisingly less so. We are so used to incredibly buttery and heavy French cooking, but Bob Bob Cité excels at filling you up without making you sick.

We wouldn’t say it’s light. But, while they have gone all glitz and glamour on the interiors, the food isn’t so over fussed – unless you want to order a spoonful of caviar on top of each dish.

Perhaps the best thing on the menu is the relatively simple grilled sea bream, its skin rubbed with lemon and saffron, that comes served with roasted cherry tomatoes, olives, spring onions and white beans.

And, when getting a little more adventurous, don’t look any further than the fish pie which contains smoked haddock, salmon, cod and mussels. It ain’t your average fish pie – this bad boy feels exuberant but homey all at the same time – and again isn’t too rich.

And, if you can manage a bit more, grab the Île Flotante dessert. It’s a super fluffy vanilla ball coated in toasted almonds and soft toffee, surrounded by what seems like a pool of melted vanilla ice cream. Pair it with dessert wines (or more Champagne) and Bob’s your uncle.

Descend back to the real world via the glass lift with a full belly and an empty bank account. That’s how you do Bob Bob Cité.