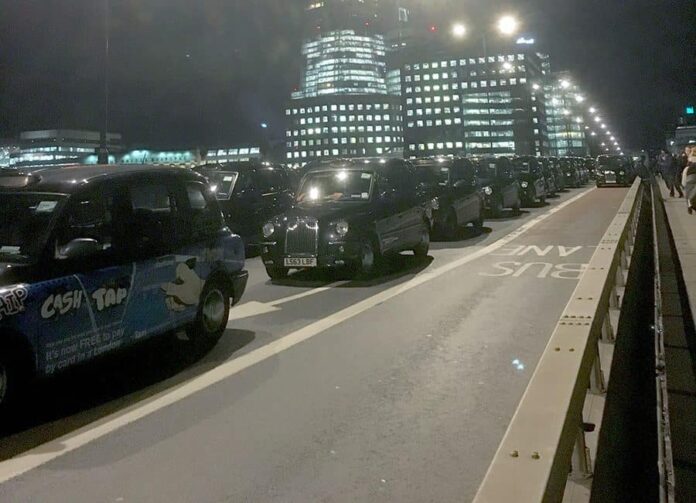 FURIOUS black cab drivers brought London Bridge to a standstill on Thursday as a five-day protest against Uber and Transport for London stopped commuters in their tracks.

Hundreds of cabbies, mobilised by the Independent Taxi Alliance (ITA), parked their vehicles across the bridge’s four lanes from 2pm until 7pm, ensuring traffic was completely stationary in both directions as workers tried to make their way home from the office.

Leaflets branding Uber “not fit and proper” were distributed to pedestrians, and explained that the campaign was demanding recompense from TfL for its failure to regulate the controversial app-based business, as well as the “immediate and unconditional revocation” of Uber’s licence.

Uber is currently in an ongoing legal battle with TfL after being stripped of its license to operate in September last year.

Despite being urged to curb their protests by TfL, drivers added to their London Bridge stunt with demonstrations in Elephant & Castle, Marble Arch, Parliament Square, and Aldwych.

“The protest is due to TfL’s passivity in dealing with illegal activity and the disregard they have for the safety of the travelling public,” said ITA liaison correspondent Sean Paul Day, who believes the matter to be black and white.

“Unless affirmative action is taken to address the issue forthwith, protests will continue.”

In a long and bitter war of words, Mr Day said in a statement that a recent revelation about the way Uber booked its journeys was the driving force behind the latest round of demos.

“TfL has published a 21-page letter stating that it found the company’s central computer accepted a booking only after a driver had done so,” he said.

“The process fundamentally changes the way a private hire driver can be accessed, stating: ‘The point is determinative and that Uber’s current operating model is accordingly unlawful’.

“This inaction by TfL is unacceptable. No other company would be granted diplomatic immunity in the same way as Uber has.”

To further infuriate the 5,000 members of the ITA, Uber is also not paying any form of license fee while it’s appeal is in place.

“Paying lip-service to Uber does nothing to address the illegality of their operation or ensure public safety,” added Mr Day.

“A strong message needs to be sent by TfL to other companies who might be considering entering the market that they too need to abide by the prevailing legislation.”

Despite the ire of some motorists, City of London Police helped facilitate and contain the planned protest so that splinter groups did not form and create greater disruption across the Square Mile.