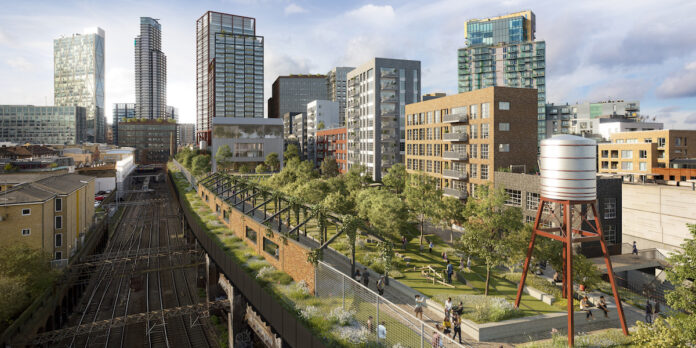 Fights over what to do with the huge Bishopsgate Goodsyard site have been going on for decades now; ever since the Old Goods Yard was destroyed by a fire in 1964.

The main development scheme introduced in 2014 faced a huge amount of backlash from local residents of Shoreditch.

The controversial plans for a mix of tall towers for office and residential purposes was rejected by the then Mayor of London, following a recommendation that the plans be revised to include more affordable home for the area, and not be as tall.

And, after some years, the new plans are up for consultation. They are planning to include 500 homes within the new development – a hefty decline on the original plans for 1,500 homes

Of the 500 homes now being planned, half will be affordable, and while 50% sounds a lot better than the 15% originally planned, it is only an increase of 25 homes (250 against the original 225), thanks to the reduction in conventionally priced homes.

But, all that aside, you can’t help but be impressed with the commercial offerings. The scheme will provide 1.4million sq ft of workspace in five buildings, including around 140,000 sq ft of affordable space – one of the largest single contributions of any development in London. It will make this part of Shoreditch come alive again.

And one of our favourite parts of the plans would have to be the high line-style public park which resembles the famous route in New York.

It will sit on top of the restored railway arches and include a series of connected gardens, terraces and walkways, with a wide variety of biodiversity, including trees and planting boxes. The park will be a huge drawcard for Shoreditch and London, providing a range of environments and spaces.

In total, the site will have over six acres of public realm, 25% larger than originally proposed and covering over 50% of the whole site. Planners have also added a series of new pedestrian streets connecting Brick Lane, Shoreditch High Street and Sclater Street, which will be lined with retail stores, residential homes and workspaces.

The restored Braithwaite Arches will provide new spaces for retail and restaurants with opportunity for over 100 emerging and independent businesses to move in.

It is hoped it won’t be full of chain restaurants, instead helping bolster smaller companies who contribute to the local community.

“We have listened very carefully to feedback on our original application and aspirations of the local community and our revised plans provide for a more balanced development that preserves and showcases the site’s heritage.

“Our proposals will create an exemplary urban quarter, with a mix of housing types, half of which will be affordable, as well as workspace, shops, cafes and restaurants, exhibition space, a cultural building, and a new public park.”

It’s hoped that all these changes will win over those who initially rejected the plans a few years ago.

Locals can’t hold back this progress, but their power to stop the older plans shows they have an important role to play in deciding how the area’s development will manifest itself.

Find out more and have your say via consultation.thegoodsyardlondon.co.uk.