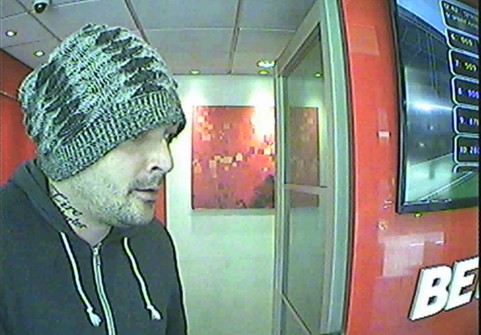 A THUG told a lone member of staff he would ‘hammer their head in’ as he robbed a betting shop.

Jonathan Ruchavest, of Theseus Walk, Islington, terrified an employee at the Betfred branch in Moorgate as he demanded £3,000 in cash.

The 37-year-old, who was identified by City of London Police from fingerprints left at the scene and a distinctive ‘Fire Starter’ neck tattoo, used his haul to fund a trip to Thailand.

He appeared before Inner London Crown Court on 19 September, having pleaded guilty to one count of robbery following his arrest in June.

The incident itself took place in May, when Ruchavest passed a note to a member of staff demanding he deposit a sizeable amount of cash into a bag.

He went on to threaten the employee, saying: “Give me everything you have in the shop or I’ll hammer your head in.” The court heard how Ruchavest then reached into the bag he was carrying, but that it was just a bluff.

He also told the staff member he had just been released from jail in an attempt to intimidate his victim.

Worried for his safety, the employee handed over cash from the till and the safe before pressing the store’s panic button once Ruchavest had left the premises. Officers from the City of London Police attended and the note the suspect left was seized.

A fingerprint was subsequently recovered and linked with Ruchavest. This gave officers details of his distinguishing features, including his unique tattoo.

When leaving the premises, a facial camera captured an image of the suspect in which the word ‘fire’ can clearly be seen on the side of his neck. Ruchavest was arrested in the summer by waiting officers as he arrived back in the UK from his trip to the Far East. The money he stole was not recovered.

“This was a terrifying incident for the member of staff involved,” said Detective Sergeant Jonathan Ball.

“Ruchavest waited until he was alone with the worker before he made his threats, and although there was no weapon involved, the worker could not be certain Ruchavest was unarmed.

Thanks to the work of our officers and forensic team, we were able to catch the culprit and he must now suffer the consequences.”

Ruchavest was given a 16-month sentence suspended for two years.