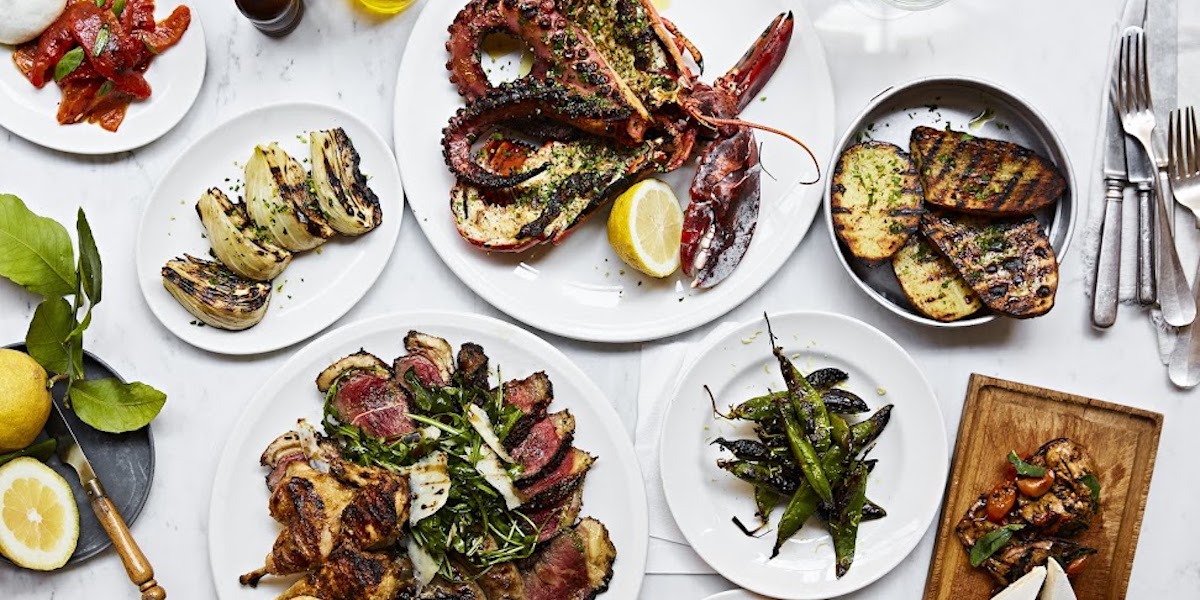 London’s BBQ season is well and truly upon us. It’s time to get grilling. And to make pitchers on pitchers of summer cocktails. But we weren’t all born to BBQ. Some of us love it. We relish in the whole process – going to the butcher, seasoning the meat overnight, preparing all the veges, lighting the webber and then cooking it all up. But a lot of us aren’t keen on all this.

That’s what London’s BBQ kits are made for. After ordering online, you receive all the marinated ingredients which just need to be thrown over the heat. That’s it. More time for drinking and catching up with people who we haven’t had the chance to see in forever. And there are so many out there. But here are our favourite BBQ meal kits from restaurants in and around the Square Mile.

Berber & Q are open across both of their venues, but they’re also delivering their cauli-kits for a wicked veggie feast at home. The BBQ kits include a whole roasted shawarma-spiced cauliflower to drizzle with pomegranate molasses, tehina sauce and spiced butter.

The main event is topped with cripsy chickpeas, green chilli, pine nuts, rose petals, chopped parsley and a sprinkle of pomegranate seeds. The box also comes with plenty of their signature hummus to go around, along with pita bread and tehina. Their Cauliflower is famous. And any food loving Londoner should have tried it at least once – why not do it from home?
The Cauli kit is priced at £27 for 3 people.

This Soho food joint has launched a pick & mix BBQ grill box where you can choose a starter and dessert box beginning with a roast peppers marinated in garlic, chilli and wild herbs served with burrata; along with a hearty portion of smoked ricotta with grilled aubergines marinated with roast tomatoes, chilli and mint.

Dessert is Bocca di Lupo’s signature tiramisu. The main event is a selection dishes ready to go straight on the grill, where you can choose and many or as few and you would like. Choices include a whole brined spring chicken; veal and pork sausage with lemon zest, bay leaves, cinnamon and cloves; 28 day aged ex-dairy cow sirloin; or octopus with gremolata and Sorrento lemon.

For those looking for a veggie option, Bocca di Lupo have created a spring vegetable panzella, a nationwide staple in Italy the dish celebrates seasonal produce with grilled asparagus, tropea onions served on broad bean puree. They’ve got a little bit of everything in these BBQ kits.
BBQ Starters and dessert kit is priced at £36 for 2 people, with additional dishes ranging from at £9.50 to £47.

Cult Indian restaurant Gunpowder has recently launched their Indian BBQ feasting box to spotlight some of the greatest flavours of India. Each BBQ kit is packed full of grillable goods, epitomising rich and intense flavours of authentic, home-style Indian cooking.

The dishes are fundamentally produce-led, created to enhance the meat and fish exactly as it was bought from the butcher or fishmonger, and spotlight some of the greatest flavours of India. Keralan beef sirloin from the south; Hispi cabbage from the mountains in the north east and wild garlic Hariyali chicken kebabs from the heart of India. Once grilled, the elements should be stuffed into Pav silk buns and loaded with sauces and chutneys.
The Summer bbq box is £50 for 2 people or £12o for 4-6 people.

Posting up in the City of London’s historic meat market since 1963, Tom Hixson Of Smithfield has also been operating door-to-door delivery since 2005. Its butchers travel to every corner of the globe – Argentina to Japan and everywhere between – in search of the highest quality cuts. And it shows with their offerings.

Nowhere more so than their Smoker Box, which delivers Australian grain-fed brisket, Wexford Valley jumbo short ribs and USDA ribs from St Louis to your door. Fire up your smoker in the morning and you’ll be enjoying that melt-in-the-mouth meat fantasy by the early evening.
The Meater BBQ Box costs £100 for a whopping 9.2kg of meat

According to Hawksmoor founders Will Beckett and Huw Gott, their ‘At Home’ BBQ kit serves two people. But you could easily feed a small family with this beast. As you’d expect from the successful steak chain, its delivery box is as brilliant as it is bountiful.

Star of the show is a 35-day dry-aged porterhouse, but the fun doesn’t stop there. It also supplies bone marrow and Madeira jus for the gravy, Koffman’s potatoes and beef dripping for their chips and tenderstem broccoli and Gentleman’s Relish. And wash it all down with a bottle of Pulenta malbec, Hawksmoor lager or its own Ultimate Dry Martini. This will send you into a glorious food-induced coma.
The Hawksmoor at Home box costs £120, limited to 500 boxes per week.

There are small, medium, and large versions of this BBQ box from Scottish mini restaurant chain Mac & Wild. Your party size will of course dictate the box you choose, but for example the medium box includes ribeye steaks, beef burgers, venison burgers, lamb chops and pork sausages and will feed between 4-6 people. With just a few extra bits like a couple of salads or a few buns you’ll have yourself quite the feast, and the careful packaging and speedy service means you get top-quality meat without any hassle.
Feed 4-6 people from £54.74