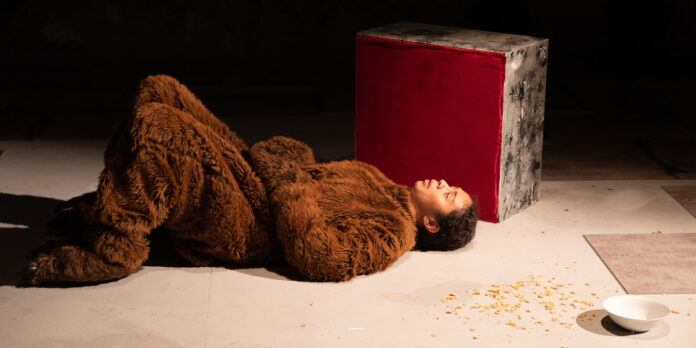 Jacoba Williams commands your attention in here one woman show Before I was a Bear (written by Eleanor Tindall) at the Bunker Theatre.

Coming out in a plush full-body bear suit, she dances around the room, unencumbered by the thoughts of anyone around. She takes off her head and tells us she wasn’t always a bear. She was once ‘normal’ – in so far as she never had fur, monstrously large feet and sharp claws.

We’re taken back to her teenage years at high school where she first becomes aware of her own sexual desires. She has boyfriends and sexual encounters with female friends on the side. It’s all a part of her figuring out what she likes and who she is. It is incredibly funny and witty – but with constant reminders of some darkness that’s to come.

Every time she enacts some agency over her own sexuality, Cally then gets ripped out of the story and back into the present – scratching herself and pulling at her fur, struggling to stand and then even spitting up blood and writhing around in pain.

These moments don’t last long though. She jumps right back into her stories as if that unsettling scene never happened. Something’s not right, but we don’t know just what that is yet. What made her into a bear?

But, inevitably, as she is discovering who she is though this, the world around her is already telling her what they think. Her friends. Her family. Strangers online. Even the media. Trying to fight back against all of this is almost impossible.

The shame cast upon her from everyone else eventually leads her into a shame spiral – forcing her to become a bear. An actual bear. The shame surrounding her own sexual desires literally transforms her into a beast.

Throughout all of this, we come to see how the world treats men and women so differently when it comes to all of this. The male gaze is examined. As is mythology, the crushes we have for celebrities and all the unsatisfying sexual intercourse we’ve had in our life.

And it is a dark comedy after all. You’ll be laughing a lot. Giggles, cackles and deep belly laughs. But you’ll get close to shedding a few tears too. They never miss a beat in this clever play.

Williams is able to masterfully turn comedy into mysterious tragedy. And then change topic with self-deprecating comedy once more. Something women are conditioned to do. Something we all do to a certain extent. Deflect and make light of uncomfortable situations – trying to ignore them altogether.

This play is made for the post #metoo era, taking us on along on a journey of a woman becoming a bear – all because her supposed carnal sexual desires have made it so.

Before I was a Bear runs until 23 November at The Bunker theatre.