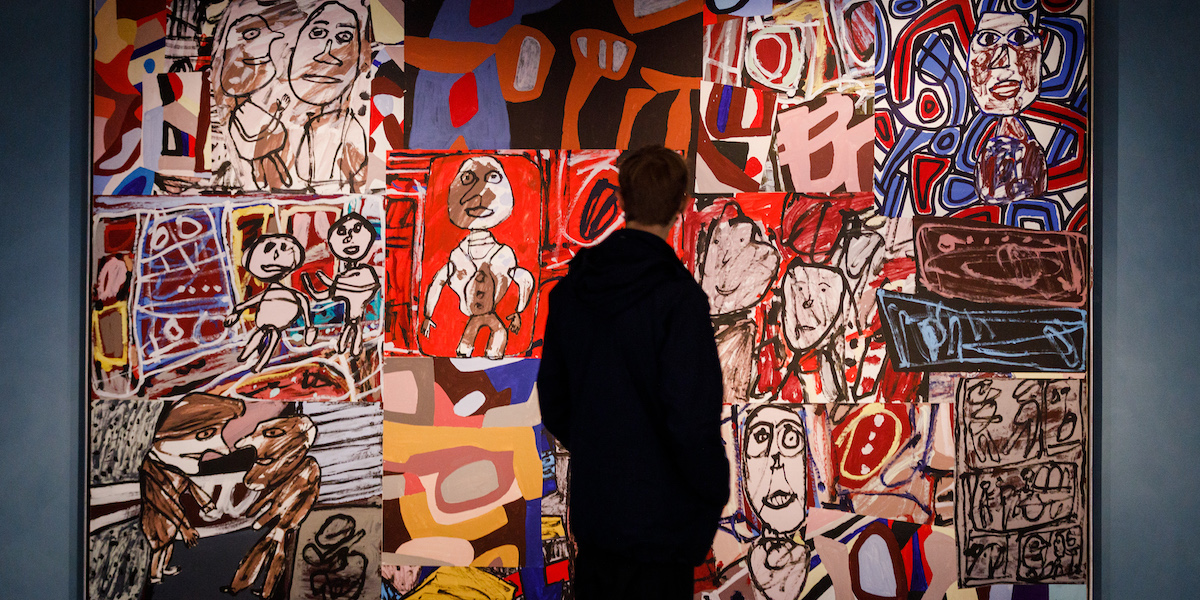 The Barbican Centre’s new exhibition Jean Dubuffet: Brutal Beauty is made for devout art lovers. This is a man who helped transform the art world, creating the Art Brut movement (or “raw art”, produced on the margins by children, outsider and folk artists and the mentally ill).

His artwork is an act of rebellion. It directly challenges classical and elite art forms. It’s a form of counterculture within the sphere of fine art. It is true artistic expression. It beautifully ugly and incredibly emotive all at the same time. He asks us to look at our surroundings differently. To go beyond traditional notions of beauty. Great!

But it doesn’t seem to have a strong point of view that goes beyond the art world. He doesn’t have much to say of the world in which his art exists.

Moreover, he regularly said that he wasn’t a political person – and that his art was not meant to be political. His abhorrent anti-Semitism is also well documented. These two things can make it hard for viewers to really connect with his works. Yes, they are visually stunning. But they don’t seem to say much.

He comes across as a privileged white dude who benefitted from the world as it was. He had no interest in challenging it. He just wanted to freely express himself through art. Is that enough?

For us, it wasn’t. It is visually appealing.  And he uses so many different kinds of materials to make his artworks. That’s very cool. But there never seemed to be much of a story – other than Jean Dubuffet sticking his middle finger up to the elite art world of his time. We didn’t feel moved or connected to him or his art. Others may disagree. And that’s totally fine.

The exhibition may have benefitted from more detailed explanations of his work, or better describing his impact on art that followed him. We saw how he was inspired to work against the elite artists of his time. But the exhibit failed to show much of his legacy. How he changed the art world, and who came after him, being inspired by his artistic talent. We would have really appreciated such context to his art. Then, perhaps, we could have better understood his significance.

True art lovers and critics can likely fill in these gaps for themselves. And they may appreciate it on a different level because of the base knowledge they bring to an exhibition like this. But the amateurs out there might feel a little lost within the Barbican Art Gallery. Feeling unsure why they are looking at Dubuffet’s work. Basically, why should we care?

It’s especially disappointing that the Barbican Centre curators didn’t seek to address his anti Semitism. They briefly mention this on a wall, in a dark corridor leading from one space to another. It’s on the timeline of his life. And they have little to say about such racism. They did themselves a disservice with this. It’s not quite enough to separate the man from his artwork in such a way. Especially nowadays.

For the devout art lovers, we can see how this is a must-see. They can appreciate this talented artist just as he is. But for those of us who want more, it may feel a little lacklustre. There isn’t much to hold on to. He fought against the art world‘s elite leaders, but he didn’t seem so interested with what lay beyond that.

Unfortunately, his apolitical stance (or tacit consent for the status quo that came from his own privilege) seems to always be in the room as you walk around the gallery. Many of us go to exhibitions to see how artists are challenging the world around us. To make us questions the powers that be. To teach us something we didn’t know.

He did this when it comes to his views on the art world. It just rarely went much further. We got Brutal Beauty, but nothing was said of our brutal world.