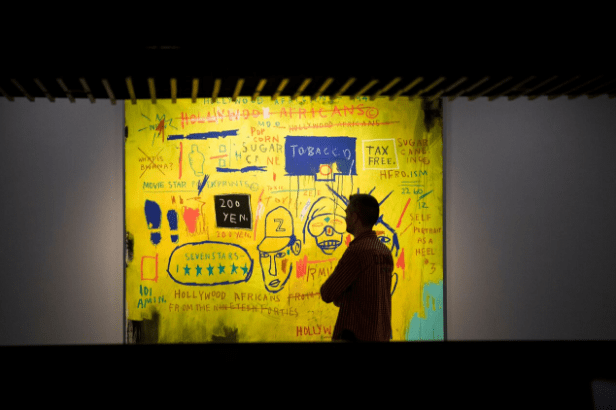 THERE’S a quote from artist Jean-Michel Basquiat hovering above the Barbican’s new exhibition Basquiat: Boom for Real that reads: “I don’t know how to describe my work, it’s like asking Miles, ‘How does your horn sound?’”

Thus the problem faced by the curators charged with putting together Britain’s first ever large scale retrospective of his work; a staggering fact in itself given his influence before and after his death in 1988 at the age of 27 from a heroin overdose.

But back to the problem at hand; how to present an exhibition of an artist who, by comparing himself to Miles Davis, clearly knew his own worth, but not how to describe it. News that one of his paintings sold for $110.5million (£85m), the highest price ever paid for an American artist at auction, earlier this year only increased the weight of expectation.

In Basquiat, it would seem their answer has been to play to this expectation by placing as much emphasis on his world as on the works themselves.

Photographs of his early graffiti emblazoned across New York’s grim streetscapes are accompanied by articles from the Village Voice ousting Basquiat as one half of SAMO© (Same Old Shit), the pseudonym he shared with former classmate Al Diaz.

At the other end of the exhibition, which is largely chronological, a section documenting his famous friendship with Andy Warhol goes beyond the iconic self portrait to hand-written notes and the original lease of the studio he sublet from Warhol.

What falls between is a chronicle of Basquiat’s meteoric rise and an exploration of how film, music, collaboration and the city itself influenced his work, and vice versa. There is almost no mention of his death; this is a celebration of a legend.

We get a glimpse into achingly cool underground clubs like Mudd and Area, the source of many Basquiat collaborations, a couple of scenes from Downtown 81, Glenn O’Brien’s real-life snapshot of post-punk Manhattan starring Basquiat in the lead role, and the single Beat Bop he produced with the two artists featured in the painting Hollywood Africans.

This was a man who quite literally had a hand in almost every artistic medium available to him. One can only imagine what he would have done had he lived to see the internet.

The lower floor of the gallery is given over to his influences – art history, music, political philosophers, television – it’s clear from the room dedicated to pages of his notebooks Basquiat consumed everything he could and produced one of the defining voices of New York’s new wave movement.

It is only after reaching this conclusion that a second quote printed on the other side of the gallery’s central column carries its true weight:

“I never went to art school… I just looked… that’s where I think I learned about art, by looking at it.”

Basquiat: Boom for Real is on at the Barbican Centre until 28 January 2018.

Images © The Estate of Jean-Michel Basquiat, Licensed by Artestar, NY