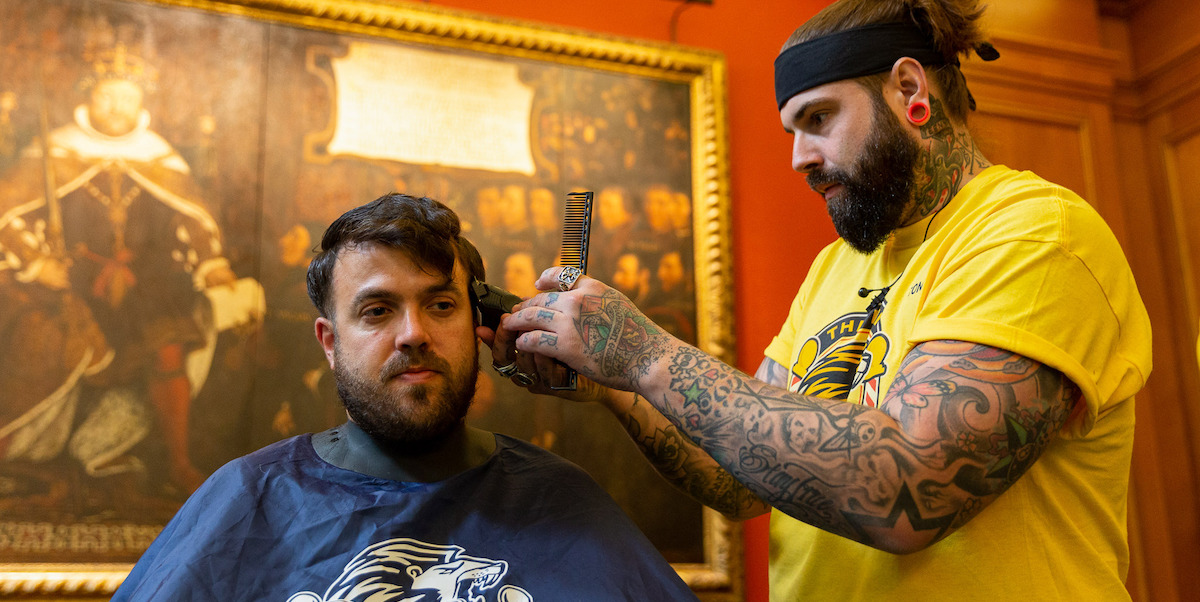 It’s long been known that the barber’s shop is one of the places that men open up about their feelings. There’s something about having a conversation with someone you see regularly and chatting without intense eye contact which can help people talk about what’s really on their mind.

And according to a survey by barber’s suppliers Bluebeards Revenge, more than half the men they quizzed saw their barber more often than their GP, and said they were more likely to discuss private issues whilst sitting in the barber’s chair than the doctor’s surgery.

Suicide is the biggest killer of men under 45 and that’s why the Lions Barber Collective decided to go one step further and set up training to help prevent suicides.

They gathered at the headquarters of livery organisation (an old name for a trade union) The Worshipful Company of Barbers in the Barbican to raise awareness of men’s mental health.

The collective was set up by Tom Chapman, who lost a friend to suicide in 2015, and it is turning barber shops into safe spaces for men, using the opportunity of a regular haircut to start conversations about mental health and reaching people doctors may not get to see.

Mr Chapman’s work has grown internationally and won the support of the Duke of Cambridge via the mental health Heads Together Legacy project. It also won a Prime Minister’s Point of Light award in 2017.

The collective set up their barber’s chairs underneath Hans Holbein’s stunning 1542 painting of King Henry VIII and the Barber Surgeons as part of their recruitment drive ahead of World Mental Health Day.

This year’s theme is suicide prevention and organisers ran a campaign called 40 Seconds – highlighting the fact that someone dies from suicide every 40 seconds.

It’s thought to be the first time for centuries – if ever –  there have been haircuts in the livery hall at Monkwell Square, Barbican.

Daniel Davies, who has a chain of six barber’s in London, including Trafalgar Square, Westminster and the edge of the City and shops in New York and Birmingham, said: “Every week we encounter somebody who needs our help because they are mentally not strong.

“Coming to the barber or a hairdresser, it’s a friend with no ties and it’s easier to open up.”

He said the training helps barbers cope with some tough conversations.

“A colleague had a client come in and he was upset. He’d been coming into the shop for years and he wanted to open up. He had attempted to take his life the day before and was going to see people to tell them and he wanted to run through this with his barber, the person who he entrusted with something that important.”

Mr Davies added: “The best thing you can do is just listen. The best thing is just talk to your customers and listen to their needs. It can really push it forward.”

The Lions Barber Collective runs two levels of training – BarberTalk Lite and a longer one-day BarberTalk Training to help teach people to recognise, talk, listen and signpost indicators of mental distress as they wield the scissors and razor. The training is funded by the City of London Corporation.

Councillor Marianne Fredericks, who chairs its health and wellbeing board, said: “Tragically, suicide is the single-biggest killer of men under the age of 45 in the country. This initiative is a fantastic approach, bringing the conversation about male suicide to the forefront and helping men open up about their mental health in a safe space.”

Mr Davies stressed that signposting support is also key to help clients. The collective brought together health professionals, people from City businesses and politics, and also teamed up with the Samaritans and Zero Suicide Alliance at the event, which encouraged people to watch its training video to help them talk to people they are concerned about.

Justine Mayer said: “It’s a misconception that talking to someone and asking if they are thinking about taking their own life puts the idea into their heads.”

She said it can help people realise “where they are” and get help.

And the Zero Suicide Alliance’s co-founder Steve Mallen said “we need to be much more mentally literate in the community”.

Claire Murdoch, NHS England’s national mental health director said: “The NHS is never enough when it is about issues of mental health.”

She added: “We need all of your expertise to step up to the plate and spot if things might be issues for someone.”

Xavier Burrows-Ware decided to do the training and become an ambassador for the scheme. He is a regular model at the London School of Barbers which has branches at Smithfield and Liverpool Street.

He said: “It’s looking for different signs, so it could be someone who regularly comes in for an appointment and they might change their appointment times. It’s asking more open questions, you want to pull the mask off and ask ‘how’s your day been going for you?’.”

And he said it’s important the barbers can also signpost people to the help available in the community, whether it’s Samaritans, the drop-in Safe Havens that people can turn to in crisis, or charities like Mind.

“It’s about raising awareness, but also the fact that at the barber’s there is no judgement,” he added.

For Tottenham barber Mucktaru Kargbo, known an MK, it also means running events around Formula 1 and boxing for his customers. He’s been a barber for 26 years and has run his own business for the last 16.

He said as a barber: “You are a psychologist whether you like it or not.”

“It’s important to have those conversations, just to make people aware that they have somewhere to go.”

And he reassured people that conversations in the barber’s chair are confidential.

“You would have a very, very short career if you do not know how to keep your word. It is a very privileged place of trust.”

Connor Evans runs the Men’s Grooming Company in Coventry. He said there was something special about the barber’s chair: “You never know who you are going to get in your seat.”

Consultant psychiatrist Dr Peter Aitken, who is a trustee of the Lions Barbers Collective, said the barbers are helping to “promote hope and resilience” and help to reach people across the country, including students away from home for the first time.

By learning to spot the signs of depression and helping signpost and support their customers they are playing a part as the “eyes and ears of the community” and offering “a safe space where people can talk about whatever comes into their minds.”

Seriously good spin classes in the City of London

How to beat the January blues and avoid burnout