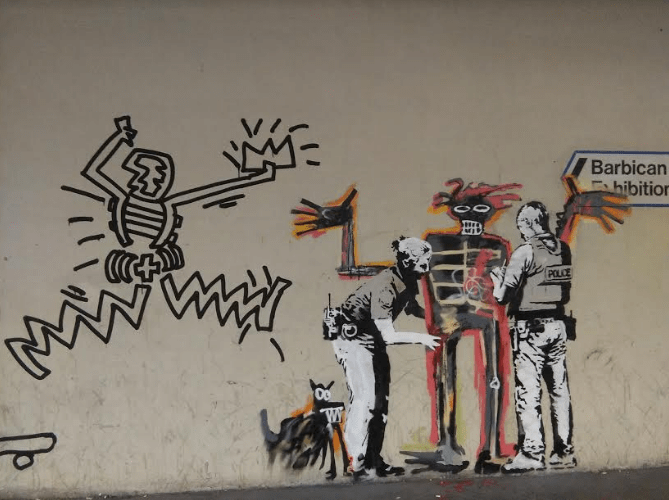 Street artist Banksy has made the Barbican Centre the subject of his latest work, poking fun at its new exhibition with two new murals in the Square Mile.

The murals, which appeared off Beech Street tunnel earlier this week, were inspired by the centre’s upcoming retrospective of American graffiti artist-turned-painter Jean-Michel Basquiat.

The artist took to Instagram to confirm the works were genuine, describing one as an “(unofficial) collaboration” with Basquiat: Boom for Real, which opens Thursday.

He captioned the first work – a Ferris wheel with people queuing for tickets – with: “Major new Basquiat show opens at the Barbican – a place that is normally very keen to clean any graffiti from its walls.”

Major new Basquiat show opens at the Barbican – a place that is normally very keen to clean any graffiti from its walls.

The second mural, which was inspired by Basquiat’s famous piece Boy and Dog in a Johnnypump, is captioned: “Portrait of Basquiat being welcomed by the Metropolitan police – an (unofficial) collaboration with the new Basquiat show.”

The City of London Corporation is yet to decide on the fate of the two artworks, telling media outlets it was “in discussion” with the Barbican Centre and residents on how to preserve them.