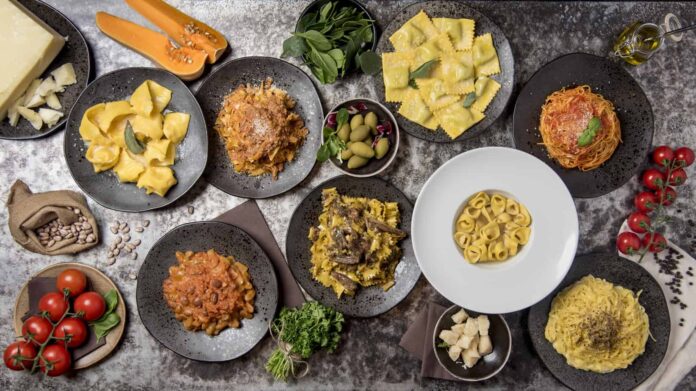 He pauses. “Why would you need to go anywhere else?”

Yes, the Napolitains can have their pizza and the Sicilians their seafood, because here in Hoxton Square is a tiny restaurant dedicated to showcasing cuisine from a region known locally as Food Valley.

Directly through its heart runs Via Emilia, an ancient road that connects eight major cities en route to Rome, and an obvious choice when it came to the naming of the restaurant.

Via Emilia is Christian’s second eatery under the Food Roots banner of restaurant concepts delivering an education on authentic culinary traditions and products from small producers in the north east.

Fitzrovia’s In Parma focuses its menu around Parma’s reputation for cheeses and charcuterie, with one of the largest selections this side of the Channel, and stuffed pastas like anolini in brodo and tortelli d’erbetta. Via Emilia casts the net slightly wider, with signature pasta dishes from each of the eight Emilian cities including Parma, Modena and Bologna. Each is made with whole egg pasta and ingredients fastidiously sourced from the region; no ducking out to Tesco for some olive oil in this kitchen.

While it would be tempting to dive straight into this smorgasbord of tagliolini from Parma, ragù from Bologna and pisarei from Piacenza, the golden rule at Via Emilia is don’t skip the starters.

To do so would be to miss out on the gnocco fritto; a light, crisp little pillow of pizza dough best served smeared in creamy squacquerone cheese and draped with prosciutto or mortadella. It’s crisp, salty and will make you forget everything your parents ever warned you about not filling up on bread.

Our gastronomic tour of the region from the main menu begins with turte vèird from Reggio Emilia; flavour-packed parcels of ravioli filled with spinach, ricotta and parmesan with a butter and sage sauce. Next comes the stand-out caplaz ad zuca; melt-in-your-mouth slow-roasted butternut squash and parmesan somehow folded into hat-shaped ravioli that will have you looking up flights to Ferrara from the first bite.

We try Piacenza-born pisarei e faso; gnocchi and borlotti beans swimming in a rich tomato sauce, and of course bolognese makes an appearance. This is the official recipe registered in 1982 with one key factor: both beef and pork in the ragù, never one or the other otherwise, “it’s not bolognese,” Christian insists. We don’t need to be told twice.

Wash it down with bubbly Lambrusco – there are four to choose from – or a selection of wines from the region. As the menu points out, Emilia-Romagna might not have Prosecco but they do have a wonderfully fizzy Pignoletto from Imola. They haven’t got Brunello di Montalcino but diners can make do with a premium Sangiovese Liano from Bologna.

Dessert options are limited to just one, a wonderfully light tiramisu layered up with lashings of mascarpone and coffee-soaked sponge. A little research reveals this might be the only item on the menu that doesn’t hail from Emilia-Romagna (its origins are a point of contention – this is Italy, after all – but the Italian government gave the region of Friuli-Venezia Giulia official bragging rights in 2017).

So it turns out that despite Christian’s best efforts perhaps you do need cross regional borders to get your fill of Italy. Or simply skip dessert and fill up on bread.