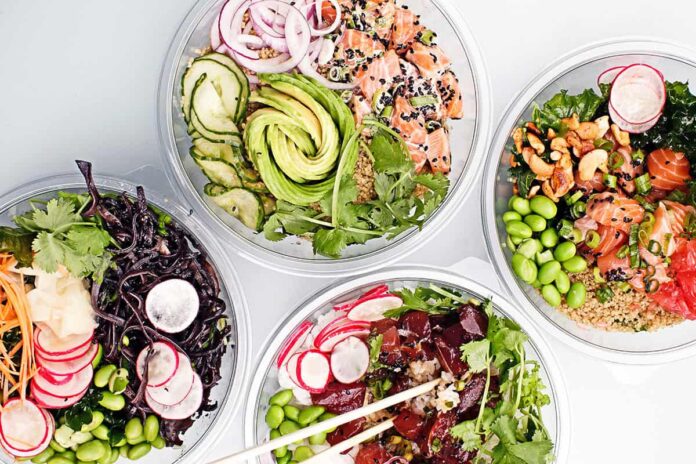 IT’S the health food trend that has had us slurping smoothies with a spoon and assembling greens, grains and proteins according to photography’s Rule of Thirds.

Pack away your plates and let go of the lunchbox; from acai to buddha, protein to power, the bowl food phenomenon and its influence on the urban lunch hour is showing no signs of slowing.

The latest addition to the line-up is a sushi-ceviche hybrid that could be considered Hawaii’s most significant global gastronomic contribution since pineapple on a pizza.

Poké (pronounced po-kay) is a Pacific street food staple of diced raw fish marinated and served over steamed rice that found fame on Los Angeles’ green streets, with the addition of super grains, greens and toasted nuts with zesty sauces.

Healthy, customisable and insanely Instagrammable, it is little wonder poké exploded in popularity across the United States, nor that enterprising restaurateurs across the pond saw fit to sharpen their fish hooks.

One such poké pioneer was Jeremy Coste, who fell in love with the dish while on holiday in California with friends Gabriel Cohen-Elia and David Bellaiche. The trio founded Ahi Poké in Fitzrovia in 2016, expanding to a second location in the Nova Victoria development last year.

Now the group has set its sights firmly on the Square Mile, opening the doors to a Spitalfields restaurant at the end of January, followed by one in Bloomberg Arcade in early February.

These are some pretty long-term plans for a dish often dismissed as one of the biggest foodie fads of 2017, but Jeremy is confident this Polynesian seafood staple will swim just fine in western waters.

“We couldn’t stop eating it [in California] – it’s just a really good combination of flavours as well as being healthy, so we knew it would work in London.”

The trio travelled to Hawaii to get a sense of traditional poké – so ubiquitous in the Aloha State that you can buy it at petrol stations – which inspired Ahi Poké’s classic Oahu bowl of rice, tuna, onion, radish, carrot and coriander.

But ultimately it was Jeremy’s training in classic French cuisine under multi-Michelin-starred chef Paul Bocuse that helped them stand out from the ‘fast food’ pack, offering customers the opportunity to build their own bowls from sustainably-sourced fish and local vegetables and proteins.

“It’s surprising but I’ve found quite a few similarities between my training and poké – the way you prepare the fish, a lot of our sauces made in house, and the focus on local ingredients,” he explains.

“We really wanted to take that fine dining approach.”

To celebrate the new openings Ahi Poké has teamed up with boutique fitness studio Psycle to create a limited edition poké bowl to kick-start your healthy January.

From 22 January to 22 February the first 50 people to get their hands on the Psycle bowl each day will receive a free fitness class.

Best rooftop bars in the City of London