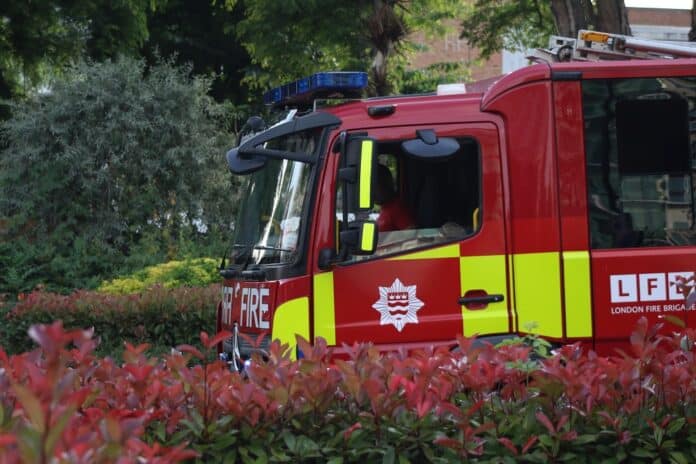 Rising COVID cases have left London fire and rescue with “unprecedented” staff shortages, says the Fire Brigades Union, with shortages meaning that up to almost a third of London’s fire engines have been out of action at points in the last week.

According to London Fire Brigade statistics 40 fire engines were unavailable on both the day and night shift on December 16, a level also reached for at least parts of the December 10, 11 and 15.

There are a total of 142 fire engines in London. Throughout the rest of the week engine unavailability was generally at above 30, according to statistics.

COVID has been skyrocketing in the service as the Omicron variant has taken hold in the capital, with almost 10 per cent of operational firefighters now either having tested positive or self-isolating, according to London Fire Brigade figures.

Some 141 firefighters had tested positive and 283 were self-isolating as of December 16.

However, the Fire Brigades Union is of the view that staff shortages due to COVID are having such a great impact due to the already low levels of fire and rescue staffing in the capital.

Fire Brigades Union data shows that since 2010 London has lost almost one in five of its firefighters – just over 1,110 – and an operational firefighter recruitment freeze in the service has only just been lifted.

Furthermore, there are fears that the levels of staffing could grow even worse, with a potential “mass exodus” of hundreds of staff ahead of pension changes in the new year.

FBU London Regional Secretary Jon Lambe said: “The new Omicron variant is having a devastating impact on the London Fire Brigade. But let’s be very clear – this should not be affecting London Fire Brigade the way it is, with almost a third of our fire engines unavailable.

“The reason that’s happening is firefighter numbers being too low, due to the devastating cuts imposed on the London Fire Brigade since 2010. London has lost one in five of its firefighters, ten fire stations and 27 fire appliances since 2010, and seen huge cuts as a result of austerity such as almost 10 per cent of its budget since 2016.2

“Going forward the London Fire Brigade needs to urgently address savage cuts made by central government which seriously undermine the ability of the brigade to best protect London, Londoners and London’s firefighters. We simply must not continue in this situation which is seeing nearly one in three fire engines unavailable.

“Firefighters have worked tirelessly throughout the pandemic assisting other agencies. Now, firefighters themselves need assistance and to be given the safety they require – they need to be appropriately resourced and ‘backed up’ at all times.”

The last week has also seen high levels of shortage of Fire Rescue Units, with six of London’s fourteen of these units being off twice in the last week – almost half.