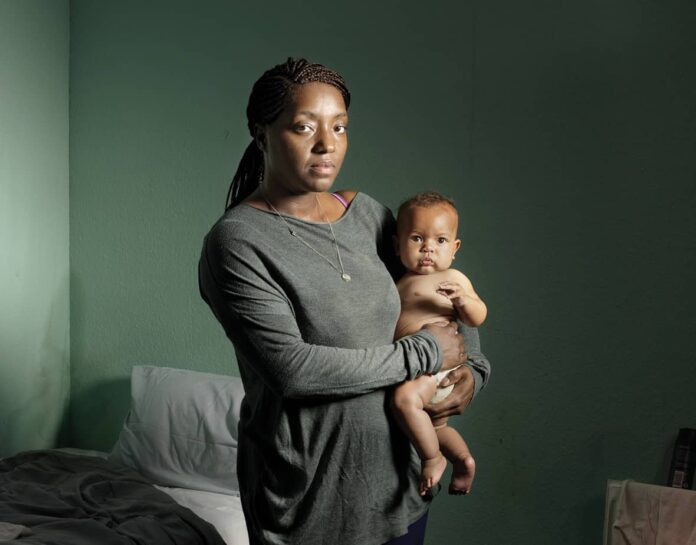 Homelessness always comes under a particularly harsh spotlight at this time of year. While the rest of the Capital is bathed in the warm glow of festive cheer, most people find it almost impossible to imagine waking up on Christmas Day without a home to go to or family to celebrate with.

It’s a desperate situation, one that acclaimed theatre director Alexander Zeldin felt compelled to explore after reading first-hand experiences in a report from homeless charity Shelter.

“The voices within it were very touching, raw and unfiltered,” he says. “At this time of year there is a feeling of togetherness in the air… as a theatre maker and dramatist it felt like a potentially rich situation.”

The result is LOVE, the story of three families who find themselves crammed into temporary accommodation in the lead up to Christmas. The characters – a middle-aged man and his elderly mother, a young family with a baby on the way, and a woman recently arrived from Sudan – were developed using the devising method with the performers.

Improvisation is essential to building the storyline and script. The cast is asked to think about what had happened to the characters in the months, weeks and days leading up to when the play starts and improvise throughout rehearsal to bring the story to life.

Alexander describes this process as one of “writing on” the actors. “The first choice is the constitution of the group as the characters will change if the actors are different,” he says.

“Their stories, energies, ideas and input but also, crucially, their bodies and the silent messages we get from them. “Bodies, rhythm and atmosphere are as important to me as words, they are also language and have an equal weight in my writing process.”

Some of the cast, including Janet Etuk and Emily Beacock, worked with Alexander in a similar fashion on Beyond Caring, which toured nationally earlier this year. The critically-acclaimed play followed four temp workers on zero-hour minimum wage contracts, telling quietly devastating stories of human struggle, as with LOVE.

Alexander acknowledges similarities between the two productions, but says he tries not to over-analyse his choice of subject. “I’m interested in telling stories about people that touch me and who are in a situation that feels possible to investigate through a theatrical process,” he says.

“In looking for a situation I am looking for one that is at once extremely precise and yet is also able to be kind of suggestive of something that is immediately current to us right now, that we can all feel together. “The question is always the same – how can we together feel and experience the world, understand the world through doing theatre together?”