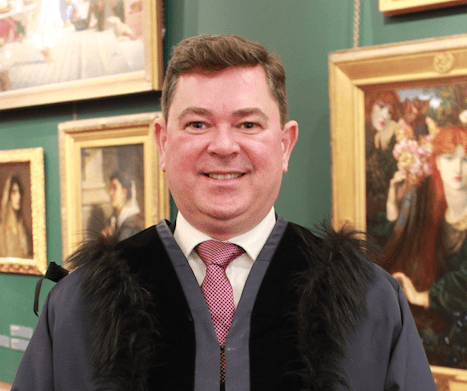 All wins for the LGBT community, among which the JPMorgan managing director is proud to count himself, but the “first openly gay” anything remains a label he is mildly uncomfortable with.

“It’s a statement of fact, and I suppose next time around it won’t be newsworthy; this is where we need to get to,” he says.

The Corporation elects two sheriffs each year to support the Lord Mayor in their civic duties, serve as ambassadors for the financial services industry, and officiate at the sessions at the Old Bailey.

And despite his reluctance for posterchild status, the fact remains that upon his appointment, alongside fellow non-aldermanic sheriff elect Neil Redcliffe, on 28 September, Tim will smash yet another glass ceiling in an area of London that arguably used to be full of them.

“I think that most LGBT people, certainly in the financial services industry, have seen enormous change over the last 15 years or so,” he says.

“I was a trainee in 1995 and in that time period between 1995 and 2017 there has been immense progress in the legal profession and in financial services.

“Everybody comes out with the saying that there’s a business case to be made for diversity, I think it’s more fundamental than that.

“I think it’s actually being able to be who you are, that’s a question of authenticity and everyone should have that freedom to bring themselves – their whole selves – to work.”

Tim has established a solid position from which to comment on the state of equality and diversity in the Square Mile, having spent almost two decades as a City derivatives lawyer, in addition to ambassadorial roles in a number of LGBT rights groups, including lobbyists Stonewall.  He became alderman for the ward of Bassishaw in May 2013.

“For a large chunk of my professional career at JPMorgan, I worked in a building literally across the road from the Corporation,” he says.

“I would probably be remiss if I didn’t say that I actually had little idea what it did or what it was.”

Shortly after JPMorgan moved to its current offices in Canary Wharf, a by-election came up in Bassishaw, a development Tim calls “deliciously ironic”.

“I could have walked to work – and then walked to my “other work” – but of course now I don’t, I get sweated up on the DLR!”

He says the decision to get involved in local governance was based on brief dalliances with student politics during his time at King’s College, during which time he was also, briefly, a parliamentary research assistant to Conservative MPs William Waldegrave and Peter Walker.

“I’ve never been one of those people who can just stand on the sidelines and make comments about things, I’ve always really felt the need to get involved.”

Aside from the judicial and ambassadorial roles during their year based out of the Old Bailey, the aldermanic sheriff’s other unique position within the Corporation is one of a Lord Mayor-in-waiting, with the term at aldermanic sheriff a requirement to be considered for the position.

“Would I like to be Lord Mayor of the City of London? Absolutely, but of course that’s a few years away yet,” Tim says.

“Clearly my role as Aldermanic Sheriff is to understudy and watch and learn and to support the Lord Mayor in their civic duties.  I would hope that in the fullness of time and subject to the support of my colleagues and election that I would have the opportunity to undertake that office as well.”

In the meantime he is hoping to get more people from the financial services industry involved in civic governance, drawing upon the City’s strong livery traditions as a jumping off point.

He says he wants a return to the medieval tradition that successful merchants would become liverymen to ensure proper governance over their industries; social responsibility would then drive them to become involved in civic governance; worlds he says are having less and less to do with each other.

“I want to bring these worlds together again. I would hesitate to put myself out as embodying it, but in a way I suppose I do.

“I’m an elected alderman — I feel a responsibility to keep up the good governance of the City — I’m a relatively successful lawyer at a major international investment bank, and I’m a liveryman of five companies.”

“I think that those are all much stronger together than they are individually and I think that has been one of the magic ingredients for the success of the City of London for centuries.”