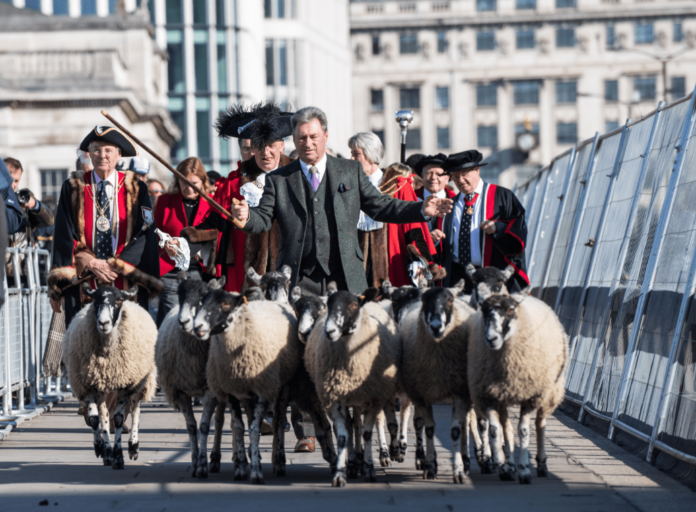 Alan Titchmarsh swapped his rake for a shepherds’ crook on Sunday as he opened the City’s annual Sheep Drive across London Bridge.

The TV gardener and liveryman of the Worshipful Company of Gardeners was up early to lead his fellow freemen of the City of London and their families in exercising their ancient right to drive animals across the bridge and into the City.

There must have been a case of “red sky at night, shepherd’s delight” as there were perfect sunny conditions for the drive, which is staged every year by the Worshipful Company of Woolmen to raise money for the Lord Mayor’s Appeal.

More than 600 turned out in various states of fancy dress to accompany around 20 sheep across the bridge for a crowd of spectators, most of whom were out for a leisurely Sunday stroll and stumbled across the spectacle.

Titchmarsh said that he was grateful for the invitation to take part in the event and looking forward to “a gentle amble across London Bridge with my flock”.

It was his first time taking part in the Sheep Drive, which has been led by TV chef Mary Berry and Dame Barbara Windsor in previous years.

The freeman’s right to drive sheep across London Bridge was originally granted to allow traders to bring sheep into the City for sale in the 12th century.

The Annual Sheep Drive organised by the ⁦@TheWoolmen⁩ about to begin. Alan Titchmarsh is the guest and splendidly dressed in a wool suit. Funds raised are split between the ⁦@LMAppeal⁩ and the Woolmen’s charities. pic.twitter.com/rg9t9L9UqS

Past master of Woolmen’s Company Bill Clark reintroduced the practice five years ago to raise money for the Lord Mayor’s Appeal and the Woolmen’s Charitable Trust, which promotes the wool and textile industries and supports research into animal husbandry and the health of ewes and lands.

Mr Clark said: “Driving sheep over London Bridge by Freemen of the City is a tradition rooted in more than 800 years of the history of the Woolmen.

“Re-energising this old tradition provides a fun day out for Londoners but it is also a reminder of the City of London’s important trading history. Wool may have been replaced by stocks and shares but London is still the world’s centre of commerce.”