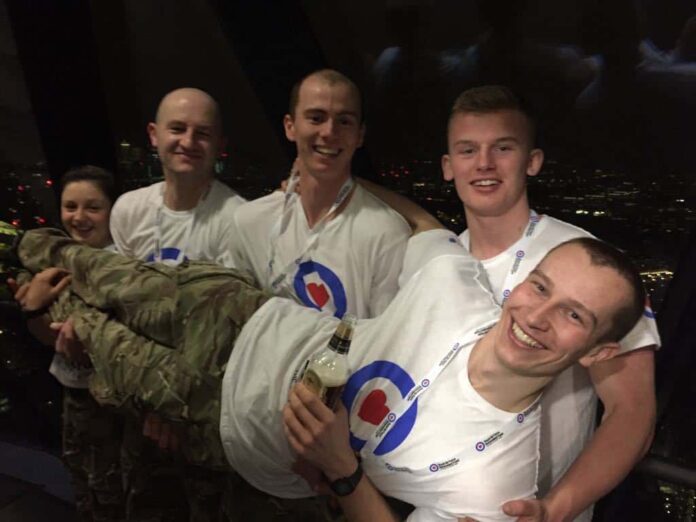 Members of the RAF are renowned for reaching for the sky, but three air force personnel have gone one step further to reach new heights right here in the City.

Usually more at more on an airstrip or soaring through the clouds Senior Aircraftman Karl Cassar, Senior Aircraftman Perry Wright, and Corporal Ryan Burrows landed at the Gherkin on 1 March in a bid to scale the iconic skyscraper 50 times in succession – matching the height of the world’s tallest mountain Mount Everest.

Standing at 180m tall over 38 floors, 30 St Mary’s Axe doubled as the 8,848m high mountain in the gruelling 12-hour challenge, which raised cash for the RAF Benevolent Fund.

With Perry leading the charge, completing 50 individual ascents, and the support crew of SAC James George and SAC Anna Duckett joining in too, the team have so far raised more than £760.

The team say they were determined to help make a difference to those who rely on the RAF Benevolent Fund for support through times of hardship.

Karl said: “The idea originally was to run up and down the emergency stairs at London Underground stations but that idea didn’t fly with their managers! But after I helped out at a collection for the RAF Benevolent Fund at London Bridge, underneath The Shard, I thought, ‘why not climb iconic buildings instead?’ After a few calls here and there, The Gherkin gave us the all clear.

“I’d never done anything like this before, but although it was so tough, it’s great to have done something that will inspire others that isn’t your normal event. Anyone can ride a bike to raise money but this was something amazing!”

Perry added: “What a challenge! I really hit a wall halfway through but was absolutely determined to see the feat through – even clocking up 50 ascents! The team work was great too – we really pulled together to see each other through.”