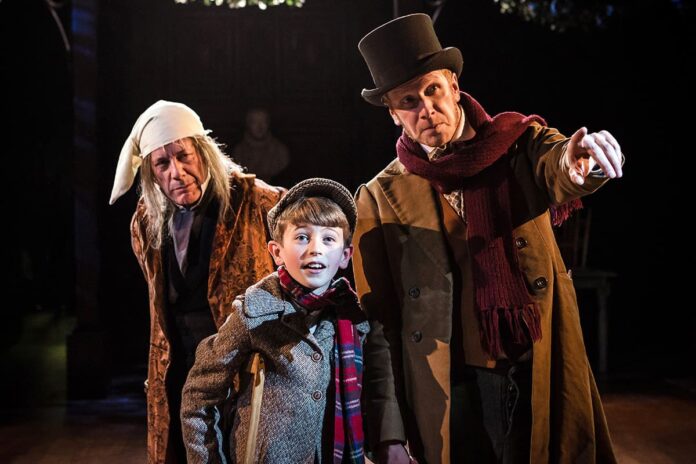 THERE are three ghosts in Antic Disposition’s production of A Christmas Carol opening this month. But the star of the show David Burt says staging Dickens’ classic in the historic Middle Temple Hall has produced at least one additional undead cast member.

“The hall absolutely reeks of atmosphere,” he says. “Charles Dickens studied law at Middle Temple, of course, so when the lights go off and you look up at all this armour on the wall one does get the feeling that his ghost is watching the whole thing very closely.”

The Olivier Award-nominated West End star shouldn’t be too concerned about the additional scrutiny; this is the third time he will reprise his role as old miser Ebenezer Scrooge for the popular musical adaptation, which adds a chorus of carols to Dickens’ iconic tale.

“I’m not one for going back to roles I’ve done before, in fact I’ve probably only done it twice in my career and neither were particularly happy experiences, but this is such a special show that keeps changing and growing.”

The songs are one of the few changes to what is a fairly faithful reproduction of Dickens’ original narrative following Scrooge as he encounters the ghosts of Christmas Past, Present and Future on a journey of self discovery. David said he is looking forward to getting back into character, which one reviewer called “the nastiest Scrooge I have ever seen”.

“The description of this character in the book is extraordinary, he is a dreadful creature, but the most important thing about Scrooge is his journey. To get this cruel miser who has completely lost his moral one has to delve deep into your own character and find the blackest moments of your life.

“I think about what really gets my goat and I put that into the first few scenes – it’s a good way to get the demons out.”

A Christmas Carol will be the final production in what has been a busy year for Antic Disposition, which made its name staging shows in historic buildings that generally weren’t built for the purpose.

Artistic directors Ben Horslen and John Risebero made headlines earlier this year when they toured an adaption of Shakespeare’s Richard III in cathedrals around the UK, including Leicester Cathedral, the real King Richard’s final resting place.

David says that while presenting a musical in a huge 16th-century hall has thrown up its challenges in terms of staging and sound echo – “we’ve all had to use our drama school diction” – the production needed very little in terms of props.

“It’s such a magnificent building, it almost feels like working on a film because the set is all there,” he says. “It’s pure Dickens.”

A Christmas Carol is on at Middle Temple Hall from 22 to 30 December achristmascarol.co.uk