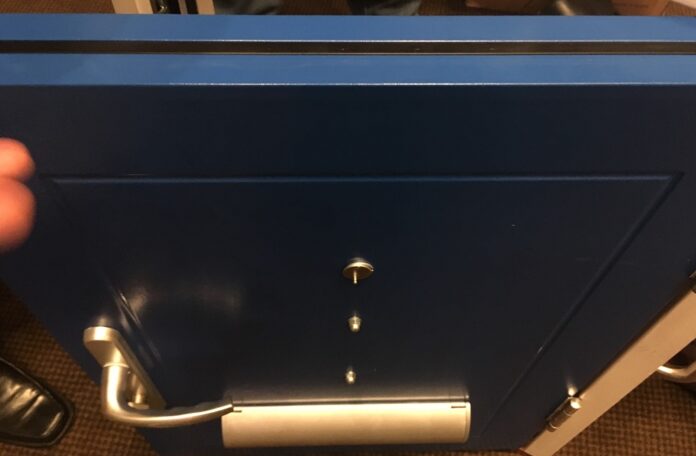 Amendment: In its latest edition City Matters mistakenly used an image of the Barbican Estate to illustrate this story. Doors in both the towers and the terrace blocks at the estate have recently been found to meet current standards. Additionally, the possibility of installing sprinklers anywhere on the estate has been ruled out both by residents’ associations and the Corporation itself. City Matters would like to apologise for the confusion caused by the use of the image.

The City of London is spending £8.9million to replace fire doors on its housing estates following the Grenfell Tower tragedy.

The Corporation, which has council homes on two estates in the Square Mile as well as eight other estates in six London boroughs, including Southwark and Islington, is replacing doors following a review after the fatal fire in west London.

Like other councils, it mounted a review of its fire doors after the blaze and discovered that “the front doors of many units did not meet present standards and were a significant risk to the compartmentation of the units”.

Compartmentation is designed to prevent fire spreading throughout a building. It discovered that the doors withstood fire for an average of 16 minutes – which was predicted for doors in their original condition.

The new doors should be able to resist a blaze for up to 60 minutes, with a minimum of 30 minutes.

The Corporation said that most of the front entrance doors were the same ones as were originally installed and have reached the end of their natural life. At the time the timber doors were expected to last between 20 to 30 years.

Although this is in line with what was predicted for doors in their original condition, it gives serious cause for concern when set against recommendations from many of the 2018 Fire Risk Assessments.” The project will also see replacement of panel surrounds and fanlight windows, communal corridor fire doors, fire escape doors from flats, and any doors to electrical intake cupboards that need to be fire rated.

The move comes after the Corporation voted to install sprinkler systems in flats as a further measure to prevent fires spreading.

Last year the council had to send doors for testing in Poland as there was such a backlog, with authorities queueing up to test doors after the death of 72 people at Grenfell in 2017.

It will procure work on an estate by estate basis as the quickest way to bring doors up to standard at
the same time across the housing estates.

The money will come out of the Corporation’s Housing Revenue Account and will include the replacement of front doors to long leaseholders’ flats, which are also the City Corporation’s responsibility.