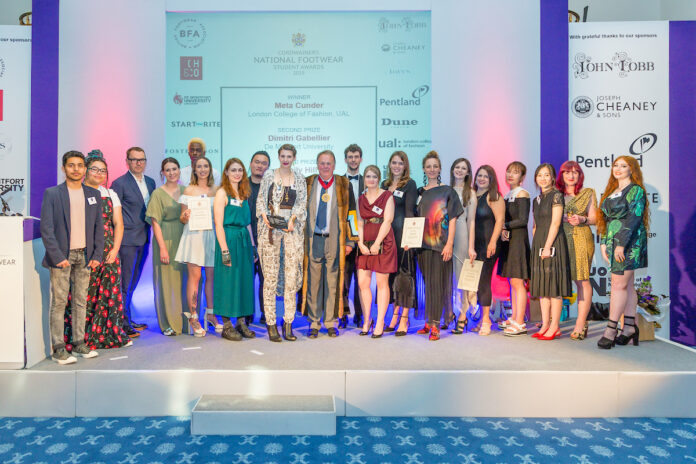 The Cordwainers’ Footwear Student of the Year competition was held at the Clothworkers’ Hall earlier this month, when 200 guests including footwear students, industry influencers and Cordwainers’ members came together to celebrate the best upcoming shoe designers in the UK.

The Cordwainers launched the National Footwear Student of the Year Awards to support the future of the shoe industry and to celebrate and encourage young footwear talent.

Penny Graham, Clerk at the Worshipful Company of Cordwainers said: “We are delighted to host this national award for the very best footwear design students. We believe that recognising and supporting the next generation of footwear talent is an important part of helping Britain to maintain its position as the world leader in the design and manufacture of footwear.”

Applications were invited from the footwear students at the three universities that specialize in footwear design, De Montfort University, University of Northampton and London College of Fashion.

The students submit portfolios of their designs for a pair of shoes and after an initial selection by the universities, the work of 15 finalists is presented to the judging panel of Atalanta Weller, Joachim Sedelmeier (Head of Design, Shoes, at Paul Smith), along with guest judge and previous winner Helen Kirkum and chaired by Katie Greenyer, Creative Director, Pentland Brands.

Liveryman Katie Greenyer, chair of the judging panel, said: “I can really say this has been the highest of standards and the toughest year to judge by far, taking us an additional two hours to debate the work, challenge each other, and to delve deep into the students’ rationales to justify our decision.”

Winner Meta Cunder was ecstatic about her win: “It feels incredible to win this award! It means the absolute world to me, as it will allow me to kick start my career and help me set up my own brand.”

Master of the Worshipful Company of Cordwainers, Jonathan Hooper expressed his thanks to everyone who supported the awards: “The Cordwainers National Footwear Student of the Year Awards is a prestigious event, and we are grateful to the support from the footwear industry and the universities that make these awards possible.

“The Cordwainers have been nurturing and encouraging emerging talent in the footwear trade for nearly 750 years. Our position as the largest private provider of scholarships and bursaries in footwear education is part of our ongoing commitment to raise the profile of the footwear industry in the UK.

“This evening is hugely important, as it provides the students with the opportunity to network with the most influential people from across the sector and, in turn, enables industry professionals to meet the footwear stars of the future.”