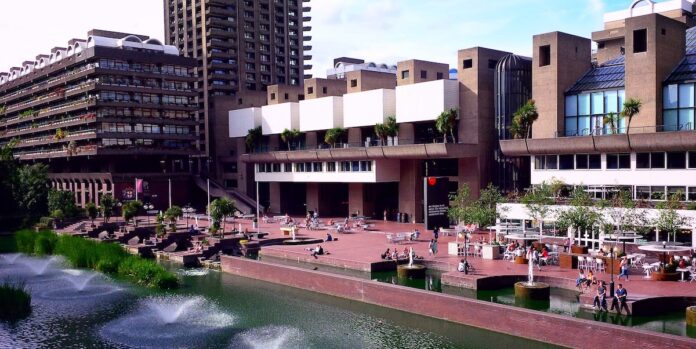 London’s famous Barbican Centre could be in for a £10.1million refurb next year to address “serious” health and safety risks. A report by the City of London Corporation warned of “extremely unsafe” sections of the Grade II-listed centre that are used by maintenance staff.

“A project is required to quantify, remove or reduce the risk of injury, disease or death by physical adaptions to buildings and or plant and services,” the report says.

Early-stage plans have been drawn up by the Corporation, which could also see £2.8 million spent on improving its restaurant and events spaces. The report suggests £5 million is needed to improve the “poor and aged” condition of the centre, which sits within the Barbican Estate in the Square Mile.

Another £2m is needed to address the number of “dangerous spaces” in the building that are accessed by the maintenance staff. The improvements were detailed in the report, entitled ‘Capital and Supplementary Projects Plan’.

The report said: “[The centre] was built prior to many existing health and safety regulations and the architecture/design/construction have left us [with] buildings that are extremely unsafe to maintain.

“There are multiple areas e.g. shafts… and confined spaces (restricted movement and genuine danger from loss of oxygen because of gas or water ingress) and other hard to access areas (for emergency services) all of which contain services e.g. plant, machinery, electrical water/plumbing services which have to be maintained in order to operate the buildings.

“There is genuine danger of serious injury or death because of falling from height, suffocation or not being able to rescue a casualty due to poor access. There are 54 shafts in the Barbican alone and many more risers, plant rooms, tank rooms, to be addressed. A project is required to quantify, remove or reduce the risk of injury, disease or death by physical adaptions to buildings and or plant and services.”

The report was discussed by the Corporation’s Barbican Centre Board Committee on Wednesday (November 20).

Opened by the Queen in 1982, the centre is renowned for hosting a range of performing arts including dance, theatre, classical music and jazz. Contemporary artists, such as Damon Albarn of Blur and Iggy Pop, are also currently on the venue’s event listings.

The report also said £300,000 was needed to replace a chiller in the centre’s art gallery, which is needed to “ensure critical environmental conditions [of the art works] are maintained”.

The report adds: “Failure to deliver this would result in reputational damage to the corporation and likely very large claims from lenders if art works were damaged.”

The early-draft plans were discussed by the Barbican Board Committee on Wednesday (November 20). But the project will then be considered by the Corporation’s Resource Allocation Sub Committee in December, where it could receive “in principle funding approval”.

It will then progress to later stages of approval before the project could be given the green light in the financial year 2020/21.