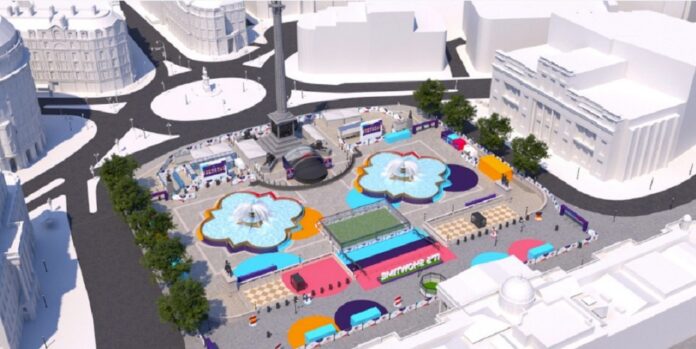 A five-a-side football pitch is set to be put up in Trafalgar Square to help promote the Women’s Euros.

Up to 7,000 people will be able to watch the final of the tournament streamed in the famous square on July 31st, and a series of activities will be set up to encourage people to engage with the tournament.

If England makes the semi-finals their semi-final match will also be streamed at Trafalgar Square.

Westminster City Council granted the fan zone an alcohol licence although drinks will not be served after 15 minutes of the second half. Fans will not be allowed to bring their own alcoholic drinks into the family friendly fan zone.

The football village will be family-focused with a variety of interactive games for children to enjoy to help inspire young generations to take up the sport including the astroturfed five-a-side pitch.

NOW READ: What’s on around the City of London in June

Exhibition games will be played in Trafalgar Square throughout the tournament and ​​there will be a screening of ‘Bend It Like Beckham’ to celebrate the 20th anniversary of the film’s release. The pop-up football pitch will also offer training sessions, live panel discussions, interviews and music.

The fan zone will be in place for nine days between 23-31 July while the tournament is taking place.

The zone will also have a small stage and fans will be able to buy food and drinks on-site. There were no objections to the festival from Westminster residents.

The Women’s Euros are set to take place across England with the final being held at Wembley Stadium.

The tournament will take place in nine cities across the country. Games in London will be taking place at the Brentford Community Stadium while other games will be at Manchester United’s Old Trafford and Southampton’s St Mary’s Stadium as well as other locations.