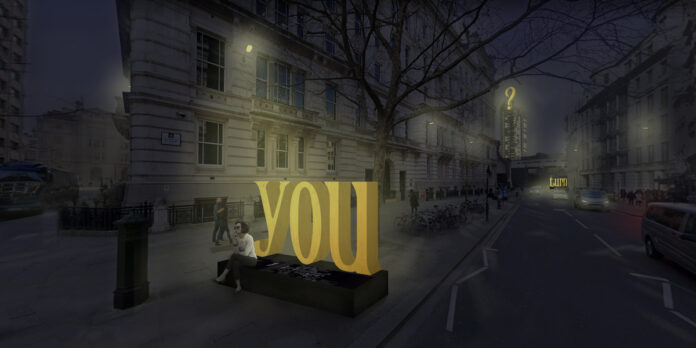 The City of London Corporation today announces that ‘Around the Corner’ by Karsten Huneck & Bernd Truempler,- KHBT has been selected as the winning design in Culture Mile’s competition to improve wayfinding, walkability and pedestrian experience along its ‘North-South route’ between the Barbican and the Millennium Bridge.

The City Corporation invited proposals from architects, designers and artists with an interest in cultural placemaking in London and its built environment. The brief asked for designs that will use visual clues and public realm infrastructure to animate and transform this route at both day and night-time. It incorporates several major attractions including the Millennium Bridge, St Paul’s Cathedral, Museum of London and the Barbican Centre.

Subject to approval, these improvements will help to orientate and open up the spaces around some of the City’s most popular visitor attractions. Once in place, the approved works will complement plans to create a new Museum of London in West Smithfield in the coming years and the proposed Centre for Music on the museum’s current site.

KHBT’s proposal is inspired by a quote from Virginia Woolf’s novel Jacob’s Room: ‘”The strange thing about life is that though the nature of it must have been apparent to everyone for hundreds of years, no one has left any adequate account of it. The streets of London have their map; but our passions are uncharted. What are you going to meet if you turn this corner?”

Starting at the South of the route at the Millennium Bridge, each word of the last sentence will be located at points along the walk where it acts as a wayfinding tool, as well as a sculptural attractor where people can be informed about Culture Mile and the place where it is located. The distance between each of these ‘signs’ allows the pedestrian to be guided between the last and the next word along the path.

The proposal is inspired by the history of London as a whole and 20th Century literature specifically: a time when the City of London was starting to thrive, and many writers focused on the subject of an enigmatic London.

Virginia Woolf was part of a group of modernist writers that brought interesting changes of unusual narration to literature. Authors began to tell stories in a way that reflected the fragmented and disconnected world.

The proposal seeks to create a new emotional connection that allows the visitor to explore an otherwise overlooked thoroughfare and its cultural destinations. The font is inspired by the very first edition of the book in 1922, directly linking the installation back to the historical periods that inform each corner of the City.