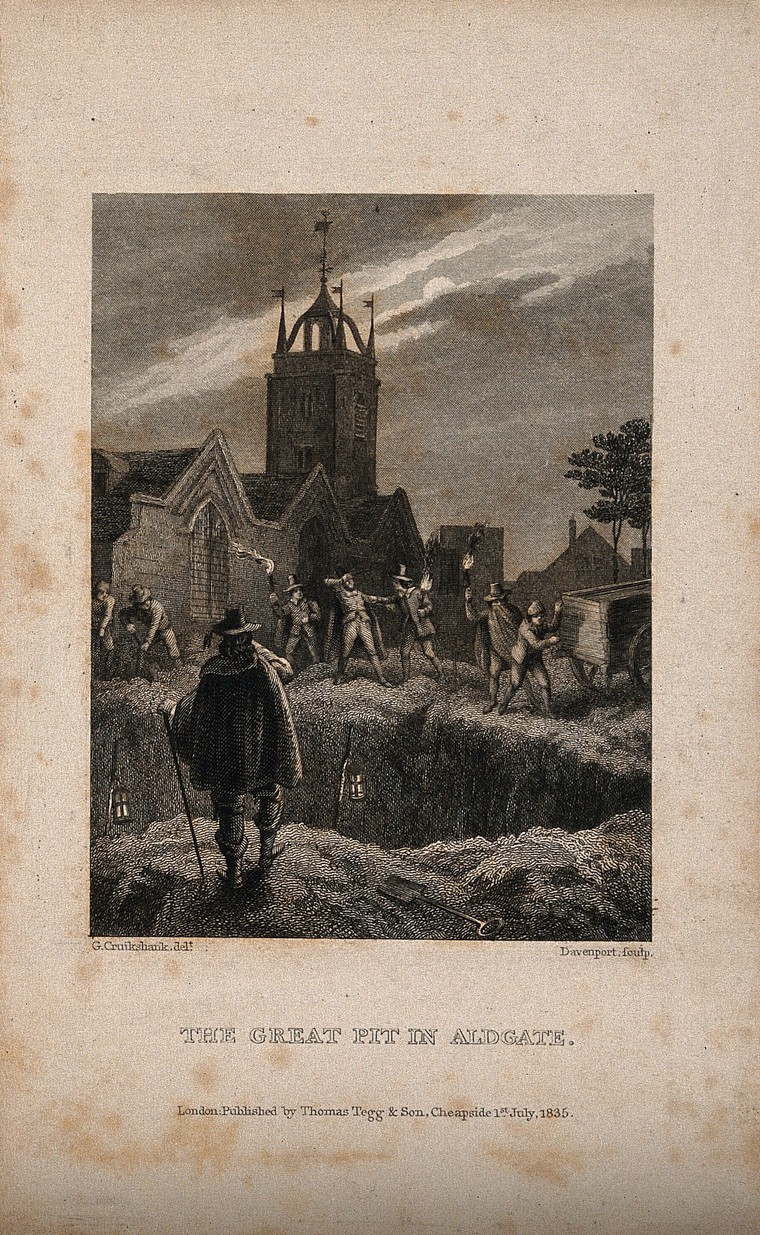 If local folklore is to be believed, when you tap in through the barriers at Aldgate Underground station and walk downstairs towards the platforms you are, in fact, passing through a space that was once occupied by a huge plague pit.

The legend continues that construction workers in the 1870s who were excavating the massive trench to accommodate the extension of the Metropolitan Railway and a new station at Aldgate made the grim discovery of over 1,000 skeletons buried haphazardly in a compact area.

This huge jumble of human remains gave the impression of having been buried in great haste as opposed to being buried in individual graves with their feet facing east, as per Christian tradition.

This morbid tale is repeatedly cited on numerous websites as well as in several books written about London’s history. You have to admit that it is a great story.

There is something unsettling but yet rather gripping about the idea of the dead carts trundling around Aldgate collecting the corpses of those recently deceased from bubonic plague and then dumping them unceremoniously into a huge pit, only for their mouldering mortal remains to be discovered two centuries later by horrified construction workers.

But is this story actually true? It certainly has the whiff of the urban myth about it. We know that the dreadful outbreak of bubonic plague in 1665 killed approximately 100,000 Londoners in just a few short months that summer.

This amounted to 20% of London’s population, and this ‘Great Plague’ caused more deaths in the Capital in a single year than any event before or since.

This, inevitably, caused a lot of pressure on the parish authorities who had to find somewhere to bury all these bodies quickly, especially when the death rate hit its peak that September.

We also know from statistics recorded at the time that Portsoken was one of the City wards worst affected by plague in 1665.

Unlike today, there were no sprawling out-of-town suburban cemeteries in London in 1665. Plague victims were instead mostly interred in the tiny churchyards of the parishes where they worshipped, although when space there eventually ran out, burial pits were also sometimes dug in unconsecrated ground in open fields.

In the more populous parishes, this meant that at times of peak death the authorities had to resort to burying many people in large pits dug in the churchyard rather than in individual graves.

Indeed, a 17th-century plague pit was discovered a few years ago when MOLA archaeologists excavated the old Bedlam burial ground at nearby Liverpool Street as part of the Crossrail project. I recently discussed the fabled Aldgate station plague pit with Mike Horne, a historian with a specialist interest in the history of the London Underground.

Mike stated that in all his extensive research into the Tube’s history he has never once found any reference to the discovery of plague pits during the construction of the 19th-century parts of the London Underground.

He also points out that the many online references to Aldgate station being built on a plague pit are somewhat scarce in detail and fail to cite any primary sources that place the pit at the location where the station was built.

However, Mike confirms that human bones were regularly encountered when building the early Tube lines and that these tended to be re-interred decently at Brookwood Cemetery in Surrey.

Anyone familiar with the area will be aware that Aldgate Tube station is located virtually next to the parish church of St Botolph Without Aldgate.

In one of the darkest segments of his brilliantly creepy historical novel, A Journal of the Plague Year, Daniel Defoe has his protagonist describe a chilling late night visit to the Great Pit of Aldgate.

Here, it is described how a ‘dreadful gulf’ was dug in the churchyard, into which 1,114 bodies were deposited between 6-20 September 1665. In fairness, it needs to be pointed out that Defoe was just a five-year-old kid during the Great Plague, but it is acknowledged that his novel was written so well that people were initially fooled into believing it was a real, newly-discovered eyewitness account rather than a work of historical fiction.

However, what appears likely is that Defoe’s ‘journal’ was heavily influenced by the experiences of his uncle Henry, who lived in Aldgate and worshipped at St Botolph’s in 1665.

Defoe appears to have bolstered the anecdotal stories told to him by Henry with lots of scrupulously researched historical sources… and a little bit of his own imagination.

However, Defoe’s reference to a plague pit dug at St Botolph’s churchyard in a novel is hardly conclusive proof that one actually existed in reality. For this, we need more corroboratory evidence, and such evidence does exist.

I’ve seen the ledgers in the Church Warden’s account book at the London Metropolitan Archives showing how £9 and nine shillings was paid out of the parish coffers in 1665 “for digging of pits in the contagious sickness tyme”.

So, there is clear evidence that pit burials occurred at St Botolph’s churchyard in 1665, right beside where the Tube station would be built two hundred years later.

There is also anecdotal evidence from Defoe that this pit seems to have been located along the northern perimeter of the churchyard. Bear in mind that the churchyard was much larger in 1665, extending northwards across what is today St Botolph’s Street.

Given all of this, it strikes me as perfectly reasonable that workmen digging such a massive, wide trench for the new Underground railway and station at Aldgate might very possibly have encountered the famous Great Pit of Aldgate as they dug.

Such a significant excavation could hardly have avoided encroaching on the ancient churchyard, parts of which had seemingly been built over by Victorian times. It just seems rather odd that no documentary evidence of this exists.

Maybe uncovering and disposing of old bones when building the Tube was so commonplace back in the day that it just wasn’t felt worthy of being recorded.

So is Aldgate Tube station built on the site of a plague pit? Like all good historical mysteries, we simply can’t be 100% sure. But the evidence strongly suggests that a plague pit was either located on this site or within a handful of yards of it, and was very plausibly disturbed during construction of the Metropolitan Railway.

That’s something worth contemplating when you next find yourself awaiting the arrival of a late night train on an eerily deserted Tube platform.