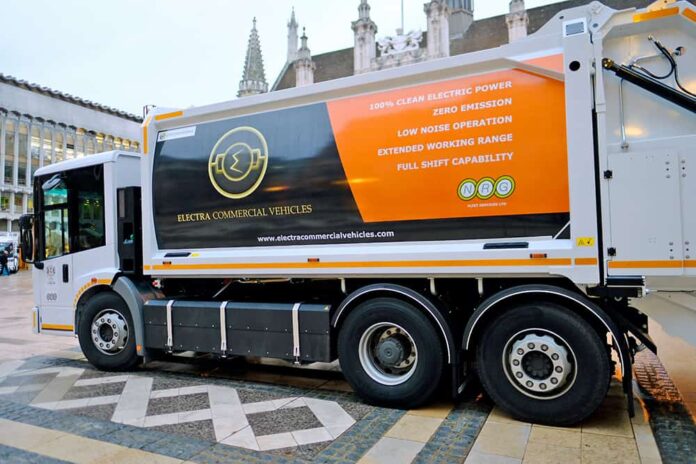 THE UK’s first fully electric refuse truck, named Electra, will be trialled in the City of London next month in a bid to cut down air pollution in the Square Mile.

The 26-tonne truck runs on lithium-ion batteries instead of diesel, is designed for urban environments with short routes, and can complete a full 10-hour shift.

“The vehicle is the first of its kind. It’s fully electric, both for compression of the waste and for powering the vehicle, and crucially – no diesel emissions,” said Jeremy Simons, chairman of the authority’s environmental committee.

He said the committee’s ambition was “to have a full fleet of clean refuse vehicles,” and that it is encouraging the use of low and zero emission vehicles with their partners as well.

The Corporation developed Electra in co-operation with fleet management company NRG Fleet Services, working together for the past six months.

The trial is part of the Corporation’s wider fightback against air pollution in the Square Mile. This month it launched a cargo bike delivery scheme, shifting deliveries from diesel vans to pedal-powered bicycles to help City businesses tackle toxic air.

It is also pioneering a London-wide crackdown on drivers who leave their engines idling and has launched its own City Air app, which gives users information on low pollution travel routes across the Capital, with advice and alerts when air toxicity is high.

The Electra trial will begin in February and last two months. The vehicle will also be trialed in two other UK cities later this year.

The Corporation’s refuse vehicles collect over 1,500 tonnes of household waste and more than 850 tonnes of recycling a year.