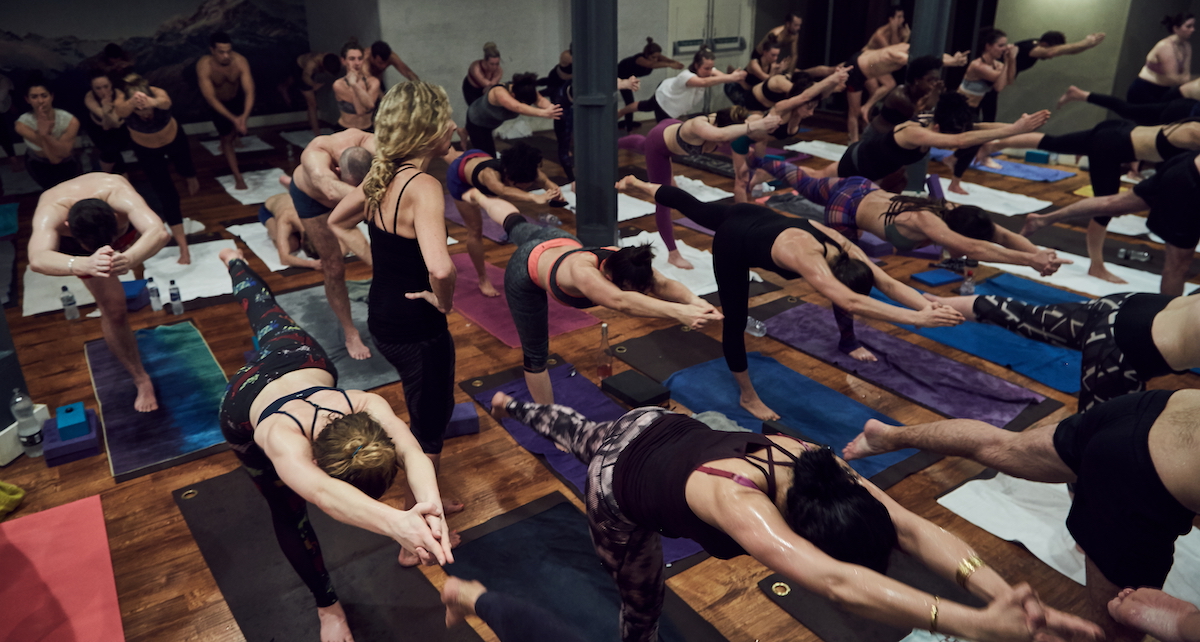 Sweaty bodies of all shapes and sizes are welcome at Fierce Grace.

It’s one of the few yoga studios in London where people aren’t obsessed with looks, preferring to focus on form and mindfulness instead. This makes it perfect for beginners afraid of slipping all over the place while trying to get into uncomfortable positions in front of strangers. There is absolutely no judgement here.

In fact, making mistakes and looking silly is encouraged. Instructors want people to try something different and to push themselves without fear of failing. All the while being safe, of course.

The studio is hot and muggy and some of the classes can be truly exhausting, but these classes are refreshingly relaxed and void of ego. Definitely worth trying out.

The Fierce Grace team works hard to help demystify hot yoga. It isn’t an Indian secret mystery club; nor is it about being the strongest or most flexible person in the room.

But it is about getting off the couch, challenging yourself and simply perfecting a pose. It’s also about sweating out the stress and anxiety we build up in ourselves. The massive 2,200sq ft underground City studio located by Old Street is a Mecca of hot yoga in London.

It boasts eight different classes made for the yoga shy, the injured, and the advanced yogis, too. It isn’t just for the young and fit folk out there. We’ve never been to a yoga class which has such a varied make up of people taking part. That’s what makes this space so special.

First things first, you’ve got to choose one of the specially-designed hot yoga classes. For beginners, we recommend starting easy with ‘In’. It is a deep, slow class, based entirely on the floor. Think of it as yoga physiotherapy which is deeply correcting, aligning and releasing.

But that doesn’t mean it isn’t challenging. You’ll leave feeling you’ve worked out. But you shouldn’t get too dizzy or overwhelmed. And if you feel you’re up for more, jump up to the signature ‘Fierce Grace’ class which brings a little bit everything into one. It’s a great base for those who are semi-regular yogis or even beginners.

‘Fierce’, ‘Wild’ and ‘The Fix’ are for the more experienced yogis and will really push you hard.

Then, just make sure you drink at least 1.5 litres of water two hours before class, and don’t eat much beforehand either.

Bring in your own towels, a full water bottle (the regulars freeze their water at home for extra special refreshment) and a yoga mat. But you can hire mats and towels if you’d like as well. Once you’re done, drag your sweaty body to the communal open-plan showers and get ready to re-enter the real world.

Again, everyone is very open and body positive here, so don’t fret about getting nude in front of others while washing off.

There are unbound body and mind benefits associated with hot yoga. For one, you tend to burn more calories due to your increased heart rate and metabolism.

The blood flow to your arms and legs is also increased, delivering more oxygenated blood to the muscles. You also improve muscle tone and flexibility much faster thanks to the heat and movements, while the general meditative qualities of yoga help reduce stress.

It can also help with body detoxification. That’s not because you sweat out all the bad stuff you drank and ate on the weekend; instead most of it comes from the extra hydration you are forced to undergo. By drinking lots of water, your gastrointestinal, urinary, and cardiovascular systems will work far better, naturally detoxifying tissues and cells and clearing the waste more readily from the body.

And on top of all that, each class is designed for more specific benefits. Just pick and choose which suits your own needs and skill level.

The intro offer of 30 days of unlimited yoga is priced at £39, while the usual monthly pass is £105. Alternatively, drop-in classes are priced from £13-£17 depending on their length.

Mindful meditation classes in the City of London