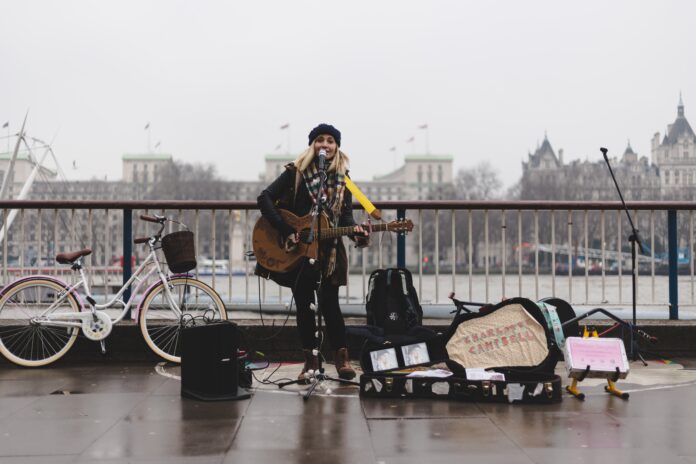 A plan to reduce noise levels has backfired after London buskers were told to sing facing the Thames.

Southwark Council told buskers outside the Tate Modern to face north and play away from nearby properties on the South Bank last year.

But the advice has been dubbed “thoughtless” after people living on the north side of the river started to complain about the noise to the City of London Corporation.

Cripplegate Councillor Mary Durcan said many of the musicians use amplifiers, which local residents want banned.

She added: “These are long hours of busking – pretty much all the daylight hours and more.

“If you’ve got this outside your window I can well understand that it drives you slightly insane at times.

“With the increase in people working from home I think it’s become more of an issue.

“The other issue is that at one point Southwark advised the buskers to face the river rather than the other way into Southwark and of course that created more of a problem for our residents on the north side of the river.

“There are several complaints every week to our officers about the noise.”

She said she would like to see various performers like people reading poetry rather than musicians playing songs on repeat.

Robin Whitehouse, who manages noise pollution for the corporation, said Southwark is no longer advising buskers to turn around.

He added: “It was a very poor and thoughtless decision in the first place.”

He said most of the noise complaints relate to a busking spot at the foot of Millennium Bridge, along the South Bank, which may be turned into a quiet spot.

He explained there are no legally-defined areas for buskers to play in but there are marked pitches for them to use and officials are planning to give out leaflets advising them where to perform.

Castle Baynard Councillor Jeremy Simons said: “The idea of having a quiet busking place is a good one but the devil is in the detail.

“How quiet is quiet? As soon as there’s nobody around they’ll turn up the volume.”